New Delhi, April 12 (IANS) Popular TV actor and anchor Aman Verma, who has also played cameo roles in a few Hindi films, alleges that the Indian film industry has become a family business and those without backers are having a hard time.

'It has become very difficult for new actors to make a mark in Bollywood unless he or she is related to someone in the industry. In fact, even I have faced a similar problem,' Verma told IANS here. He was in town to attend the launch of his new TV soap 'Sujata'. 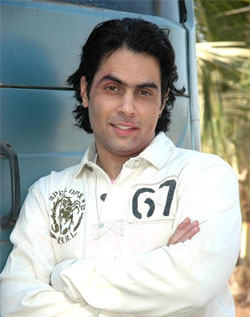 'Unfortunately, Bollywood is now a very closed industry. Some of the new crop of actors who neither have acting acumen nor are good looking are in the industry only because they are related to someone.'

Citing the example of Neil Nitin Mukesh, the grandson of late playback singer Mukesh, Aman said: 'I won't say that he isn't good-looking but he is getting offers because he is related to an industry person.

'We do have exceptions like Shah Rukh Khan and Akshay Kumar who are ruling the industry today, but then fresh entrants who have no backing at all are facing a lot of problems.'

Of late, Aman has only been working with producer-director Ravi Chopra's B.R. Films - he did films like 'Baghban' and 'Baabul', a TV serial 'Viraasat' and now 'Sujata'.

'If this production house keeps me happy and content and if I am able to strengthen my position here, why not stick here? I'm also able to exercise my acting potential comfortably here,' he said.

After a long hiatus, Aman was seen in 'Teen Bahuraniyaan'. On being asked about his break from television, the actor said that after STAR Plus' 'Viraasat', nothing excited him enough to come back.

'As an actor, I like to keep re-inventing myself; otherwise I get bored. I don't even want to be typecast in a certain genre so I feel it is better to wait for the right offer rather than grabbing anything and everything.'

In Sony TV's 'Sujata', he plays an ambitious family man, but in real life, he is in no hurry to get married.

'I will marry some day but not very soon. I need to find someone to marry first and then I will think about it,' he quipped.

The actor has a couple of films lined up - Partho Ghosh's 'Bas Ek Second' and Ravi Chopra's 'Pocket Maar', to name a few.