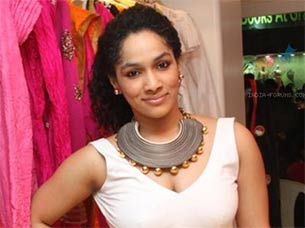 "It is important (for a designer to be sported by actors)... absolutely. Because it's very clear that the whole country runs on cricket and Bollywood.

"You either have a cricketer endorse your clothes or you have a Bollywood star endorse them and its instant popularity... it's instant connect because people want to dress like their favourite stars," she said.

"I think it's something we consciously like to do... it really helps our brand," she told the media here at the opening of her first 'Masaba' store in eastern India.

Masaba, daughter of West Indies cricket legend Vivian Richards and actress Neena Gupta, has carved a niche for herself at a very young age.

The 24-year-old launched her label in July 2009 and three years later, she was appointed fashion director at Satya Paul.

She said the style of her clothes caters to the cities she brings her collections to.

"Delhi is a market where people experiment much more and Mumbai people are more casual and Kolkata is most quirky and outlandish," she explained.

Kangana Ranaut Vs Anurag Kashyap: Actress ‘Steps Back’ after ...
5 minutes ago

Disha Salian did not dial 100 before her death, says Mumbai ...
44 minutes ago