Hollywood and Bollywood are ranked as the biggest and the most famous film industries globally. Both fraternities are varied, possessing the hottest bunch of recognized talent and capabilities in terms of glamour and fame. Despite holding a lot in similar, both contain their own charm and glitz that defines each in specific. But what would happen when stars from the West collide with those from the East? We're aware that it's happened in the past but how about those top actors that has the whole caressing their names?
Thus, as part of our theme of "Bollywood vs Hollywood", BollyCurry arises to give your wildest fantasies some wings. We present to you a list of few actors - one from the East, one from the West - who would look great as couples on-screen.
Bradley Cooper and Priyanka Chopra 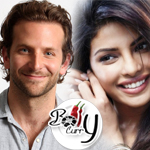 Bradley Cooper started his journey with the television serial Alias but shot to fame with theHangover trilogy and has continued to climb the ladder of success with his latest Oscar nominated film, The Silver Linings Playbook. Pairing up, we thought of Bollywood's very own diva, Priyanka Chopra. As she continues to top all departments of the glamour world including singing, she started her career as the former Miss World and holds pride in contributing to many blockbusters.
Cooper mostly portrays carefree characters in his movies where he's seen enjoying life as it is, not giving much thought to the struggles of living. On the other side we have Chopra, who varies with roles but the majority being head strong characters, taking life as it comes and living it to the fullest. The similarity of these roles makes them very compatible. We can imagine that pairing these two together will only produce a mega hit with phenomenal acting, a sizzling chemistry and a movie you're bound  to watch over and over again.
Ranbir Kapoor and Emma Stone 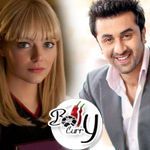 Ranbir Kapoor, the heartthrob of countless females across the world, is often called the "chocolate boy of B-Town". The young lad made his Bollywood debut in 2007 with the Sanjay Leela Bhansali's Sawaariya. The film opened to bad reviews and critics declared it a flop. However, years have passed and he has worked hard to reach where he is today, emerging as one of the finest actors of his generation. On the other hand, we have the beautiful and talented Emma Stone who started acting at a young age. After exploring her way to the city of dreams, she started pursuing her drama career, juggling studies and acting together. Her hard work eventually paid off as she received her break through a television serial. She later gained status with movies such as Easy A and The Amazing Spiderman.
Both Kapoor and Stone have toiled in their hours to ensure the fame they receive is due to them. Their effortless acting and natural portrayal gives their characters a realistic feel, leaving the audience spellbound, which is ultimately why we've opted them together. The couple are sure to create cracking chemistry and how can we not dream of their sharp and beautiful features, giving us a great couple to drool over?
Hugh Jackman and Vidya Balan 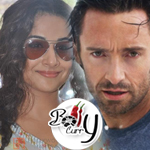 Vidya Balan, also known as the "ooh la la" girl has surprised one and all at every turn. In the news for either for her bold curvy moves, her dressing sense or for her intense acting skills, she has always pleasantly surprised the audience and that is exactly what makes her one of the greatest actresses of her generation. Likewise, we have the versatile Hugh Jackman who rose to fame with the X-Men series. The producer, director, actor and singer dons every role with utter perfection. He therefore continues to climb the ladder of success and is much sought after for his talent.
So what makes these two so perfect for each other? We'll tell you! They're both versatile and choose to do roles that are challenging and bring out the best in them. It also helps that they score high in the natural beauty section. A sizzling couple like this will definitely set the screen on fire, if ever paired together. Both are bold, beautiful and have their own unique personalities.
Ryan Reynolds and Parineeti Chopra 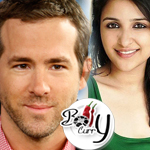 One actress who has taken Bollywood by storm is Parineeti Chopra. Her bubbly personality and strong acting skills has brought her instant recognition. Moreover, after giving hits likeIshaqzaade and the recent Hasee Toh Phasee, today she ranks as one of the best actress of the new lot. Ryan Reynolds is a name known to one and all. His charming face and friendly attitude easily captures your attention. He has also proved that there's more to him than just those moon-like eyes by giving splendid performances in movies such as Van Wilder, The Proposal and Buried among many others.
One of the many things the duo have in common is that they're both super attractive and together they would set a whole new bar of good looks and charm. However, they're not only physically good looking, they know the A in acting and friendly nature has everyone wanting to be their friends.
Hrithik Roshan and Natalie Portman 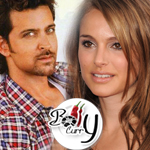 Natalie Portman, despite being from another country, has made it big in the United States. Apart from her beauty and grace, she is multi-talented as well, owning a brilliant share of acting skills and is a great dancer as proved by her stint in Black Swan. On the other hand, we have our dancing hunk Hrithik Roshan. One of the finest dancers of the country, he has won hearts globally with his adorable smile and raw dance moves. He's also one heck of an actor. Each role he plays gains him more recognition and allows him to reach a completely new level of perfection.
Pair the duo together in a movie and magic is bound to happen. Along with some strong acting skills, we would love to see a dance-off between the two. Plus, Portman has some experience of working with a superhero in Thor and our Krrish is no less. It's a collaboration bound to happen.
Arjun Kapoor and Scarlett Johansson 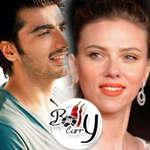 Scarlett Johansson is a born actress, starting early with her career. One of her most remarkable performances was in Iron Man 2 that gave her much due fame and recognition. After all her notable work, she is often referred to as the "Sexiest Woman", holding the same title for many nominations. Pairing it up with her would be the newest Kapoor on the block - Arjun Kapoor. He started off his career as an assistant director for the movies Kal Ho Na Hoand Salaam-e-Ishq but made his first ever on-screen presence with the much appreciatedIshaqzaade. The movie gave him acknowledgement and fame in bulk. His recently released movie Gunday is doing well at the box-office.
The two do not have much in common apart from being prior models and now being extremely good actors. That's one of the reasons why we think they would compliment each other quite well. Those killer looks also have to take some precedence. Moreover, they're the perfect recipe for any romantic action film the industry has to offer.
These were our shortlisted actors chosen as couples for their uniqueness and personality. Collaborations place take today but very rarely so here's a small wish that it spreads so we can see the best of both worlds. Before we take our leave, do let us know below who do you would like to see collaborated and we'll add a another small wish.
NB: The above list is just a personal compilation and not meant to be taken seriously.
Writer: Fatima W.
Editor(s): Shikha A. and Jenifer Y.
Graphics: Amna M.
Do you a suggestion or comment for BollyCurry? Drop us a PM at BC_Dropbox today!
14 Likes

Alaya F on working during lockdown: Everything now takes 5 ...
36 minutes ago