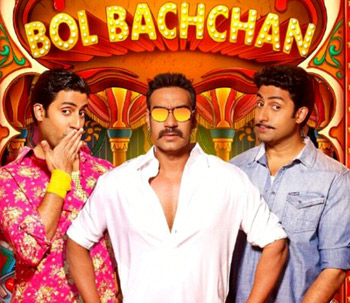 After churning out films like "Golmaal", "Golmaal Returns", "Golmaal 3" and "Singham", once again Shetty's is ready to take audience on another laughter ride with "Bol Bachchan".

Said to be inspired by 1979 movie "Golmaal", the film has Abhishek Bachchan, Asin Thottumkal, and Prachi Desai in the female leads.

The story revolves around Abbas Ali (Abhishek), a resident of Karol Bagh, New Delhi. He stays there with his sister Sania (Asin) and they are legally fighting to get the title of their ancestral property.

But the odds turn against them and they lose the case. Their well-wisher, Shastri Chacha, advises and convinces them to migrate to his village Ranakpur and assures Abbas that he will get him a job at his owner's place. The owner being none other than the powerful Prithviraj Raghuvanshi (Ajay).

In Ranakpur, while saving a child trapped inside a temple, Abbas breaks open the lock of an ancestral temple. It upsets the villagers and they are up in arm against Abbas, but Prithviraj arrives at the scene and bails Abbas out.

On being asked his name, Abbas's friend comes out with a fake name because he knew that the villagers will be outraged if they will find out that the lock of the temple has been broken by a Muslim guy.

From here starts a series of cover-ups, goof-ups and comic situations where to cover one lie, Abbas pads it up with a bigger lie that he has a twin brother with no moustache. This leads to topsy-turvy journey of a single person acting as two different entities.

"Bol Bachchan" has been co-produced by Dhillin Mehta and Ajay.

Shetty has roped in megastar Amitabh Bachchan for promotional song "Bol Bol Bachchan". In the song, the 69-year-old recreated the iconic song "My name is Anthony Gonsalves" and pops out of a life-sized egg.