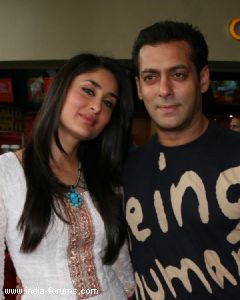 For three years now, every Eid, a Salman Khan movie has become one of the rewards of the festival. Whereas last year we had 'Dabangg', which despite its simplicity had layers into it, this year we are treated to 'The Bodyguard' which isn't a patch on 'Dabangg'. Despite this, it has enough to hold the attention of festive audiences.

Lovely does his job diligently, but is unawares that Divya serenades him under a pseudonym Chhaya over the phone, and has fallen in love with him. Things get out of control when Sartaj's enemies try to kill Divya while Sartaj thinks Lovely is trying to kidnap his daughter.

'Bodyguard', conceptually, is based on the type of stories that have made Imtiaz Ali popular - sweet, gentle love stories, where the underlying theme being sacrifice for the sake of love. Yet whereas Imtiaz Ali reveals in a certain quaint subtlety despite the melodramatic nature of his films, 'Bodyguard' director Siddique does not have that much of skills to pull that off.

The result is a film that has its few funny, slapstick moments but the problem area is the surprise twist in the end. It is an end that does not gel with the pace of the rest of the film and seems cooked up. That is especially true because director Siddique gives no foreshadowing or inclination before of a possibility of a character doing what she does in the end.

However, that would be a problem with urban audiences. As far as rural viewers go, the ending, fantastic as it may be, might actually work for the film. After all isn't there enough elements of fantasy in the rest of the film like when Salman going in the opposite direction in a train, simply jumps on to a running train in another direction. If one can digest that, one can do the same for the ending.

A little more effort on the editing table would have eased a lot of things. 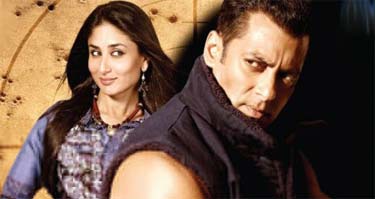 Salman fans, however, have much to cheer. They not only get to see their favourite star beating enemies to pulp, but also get to see his well toned torso, that in the end is revealed after jets of water blow away his shirt, much like the subway wind blew away Marilyn Monroe's skirt.

Debutante Rajat Rawail provides comic relief to the film not just with his antics but also the funny messages on his t-shirts like 6 Pack Coming Soon' pasted over his fat belly.

Salman is his well-chiseled self, and Kareena is as good as the script demands of her, which isn't much. The music is catchy, especially Himmesh Reshamiya composed song 'I Love You'.

Overall, 'Bodyguard' may not have the chutzpah of a 'Dabangg', but it pulls itself through to entertain viewers during the festive season.