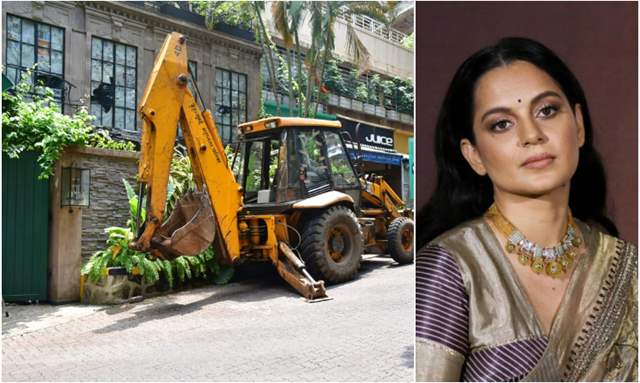 Kangana Ranaut’s feud with Shiv Sena MP Sanjay Raut took a wrong turn after she allegedly challenged her return to Mumbai from Manali. The actress was also approved with ‘Y plus’ security from the center and she is currently en route to Mumbai, Maharashtra. The Queen actress was last snapped at Mohali International Airport and was seen escorted by a chain of commandos.

Meanwhile, the actress’ office is about to be demolished by the Brihanmumbai Municipal Corporation (BMC) who were spotted outside her office today.

Earlier, the actress maintained that she is in possession of all the documents for her office. The BMC served Kangana Ranaut a notice under section 354/ A of Municipal Corporation Act after inspection.

Amid the backlash, Kangana allegedly challenged her return to Mumbai, and the Centre has extended Y-plus category security, including a Personal Security Officer and 11 armed policemen including commandos for her protection.

Reacting to the demolition, Kanana took to her social media handle and shared a few pictures of her office interior which was being destroyed. Her tweet read, “Pakistan.... #deathofdemocracy”

In another tweet, Kangana once again denied any presence of illegal construction at her house.

"There is no illegal construction in my house, also government has banned any demolitions in Covid till September 30, Bullywood watch now this is what Fascism looks like," read her tweet.

Shiv Sena IT Cell filed a complaint against Kangana Ranaut on Tuesday. The complaint was filed at Shrinagar Police Station in Thane. The Queen actress' comment saw reactions from Maharashtra ministers and numerous Bollywood actors including - Renuka Shahane to Riteish Deshmukh and more.

Apart from that, Kangana Ranaut took to her Twitter handle and informed her fans that BMC reportedly arrived at her office in Mumbai and that the team was measuring her office and it may soon be demolished. Kangana even shared a video of the incident.