January 9th is a big day for the Bollywood Fraternity seeing how two of very important members share this day as their birthday. Actor-Director Farhan Khan and Director-Choreographer Farah Khan turning 37 and 46 respectively this Sunday. The duo not only share their birth dates but also happen to share some familial ties as well given that the two are cousins. 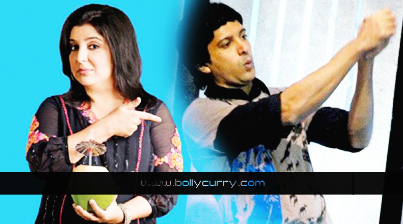 Farhan started off with his direction career with Dil Chahta Hai and later Lakshya. Both the projects did well at the Box-office. He then headed towards his acting career with Rock On! The much appreciated effort gave him inspiration and propelled him further upwards on the scale of success with movies like Luck By Chance and Karthik Calling Karthik.

Farhan Akhtar did his first ever direction at the young age of 17 with the film Lamhe and went on to assist director Pankaj Parashar in  Himalayputra (1997). He has also written lyrics for Gurinder Chadha's Hollywood project, Bride and Prejudice. Farhan has also directed a short film titled Positive based on HIV patients.

On the other hand, Farah Khan has always been a great choreographer and now she is doing spectacularly well in her directing career as well with movies like Main Hoon Naa, Om Shanti Om and now the recent Tees Maar Khan to her credit. Farah has worked for over 75 movies. She started as a choreographer under the "Dancing Guru" Saroj Khan for the film Jo Jeeta Wohi Sikander. She has the song Pehla Nasha to her credit. Not to forget Farah Khan is also to be credited for training the International celebrity Shakira for the Bollywood version of the song Hips Don't Lie for the MTV Video Music Awards. She also choreographed popular international singer Kylie Minogue in the song Chiggy Wiggy from the movie Blue.

With so many credits and achievements, we wish both the stars a great birthday and our best wishes for the upcoming years!