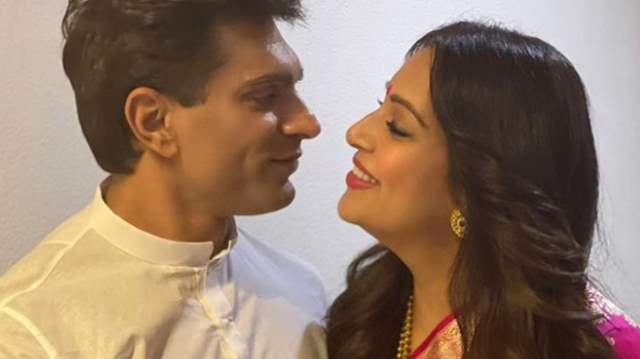 Since Bipasha Basu and Karan Singh Grover announced their pregnancy, they have received a lot of love and wishes from their fans.

Bipasha Basu celebrated the Bengali ritual while expecting her first child. On her Instagram profile, she posted images and videos from the same event. The several posts that she published late on Thursday also included her mother and her spouse, Karan Singh Grover. Bengalis celebrate a ritual called Shaad during which they treat expectant women to their favourite meals.

She first posted a video and wrote, "Aamaar Shaadh Thank you Ma #mamatobe #shaadh #mymommyisthebest." In the video, Bipasha's mother Mamata Basu, and mother-in-law Deepa Singh performed aarti for her and applied a tilak on her forehead.

For the occasion, she sported a pink silk saree and coordinating bangles, and a few other women also gave her blessings. Bipasha was also spotted cramming her mouth with food from a tray that was surrounded by numerous bowls of different foods.

Additionally, Bipasha posted a couple of photos in which she posed beside her mother and hubby. She expressed in her caption her desire to have a motherly role similar to that of her own. She also posted photos of Karan posing with her and placing his hand on her blossoming baby bump.

Bipasha and Karan announced their pregnancy with a special mote on Instagram. She penned , "A new time, a new phase, a new light adds another unique shade to our prism of life. Making us a little more whole than we used to be. We began this life individually and then we met each other and from then we were two. Too much love for only two seemed a little unfair for us to see...so soon, we who once were two will now become three. A creation manifested by our love, our baby will join us soon and add to our glee."

+ 7
2 months ago Awww... wishing the couple a delightful journey to parenthood. 🧿🧿🧿

+ 17
2 months ago Bipasha is glowing! God bless them with a healthy baby!🧿