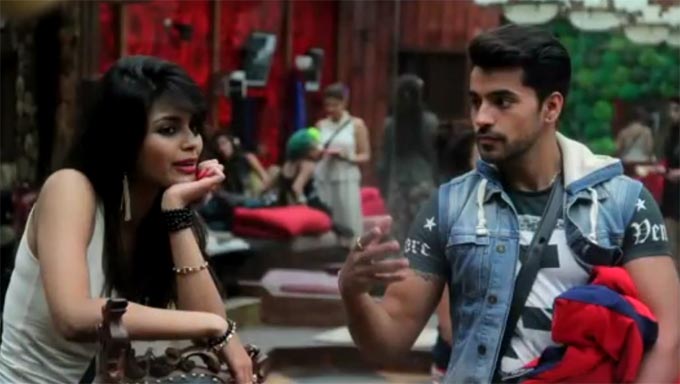 Bigg Boss house is said to be the most predicted place where things change and people in fraction of seconds which is clearly seen in Bigg Boss 8 on Colors.

As seen in the previous episodes, Sonali Raut shared a good bond with Gautam, which made people raise their eyebrows. Later she came closer to Upen Patel and started ignoring Gautam. She was seen insulting Gautam and more. Thus on Sunday, Sonali was seen giving heart to Gautam as Salman questioned everyone as why they have sidelined Gautam.

Now Sonali and Gautam will pair up again. Forgetting about their tiff for a moment, they both chit chatted and Gautam asked her why she doesn't do her duty properly? To which, Sonali bluntly responded, "Main yahan jhaadu maarne nahi aayi hun."

Later Gautam also shared how bad he felt when during the task she had to drink an egg yolk shake and he said, "Tum wo task karte waqt kaafi innocent lag rahi thi." Also, while they discussed on certain issues related to life, Sonali stated "Why in India there is a big deal about just everything?" To which, Gautam, with much sarcasm said, "Tum Bharat mein ho hi kyun??"

Seeing the closeness of Sonali and Gautam again will make Upen upset as she also gave a heart to Gautam. Thus Upen using his special power as being the captain nominated Sonali for the eviction.

Shukti_19 6 years ago Thaali ka Baingan -__-
Gautam Rockz, he doesn't need that Fake woman by his side to sustain in d show..

balashiv15 6 years ago Sonali changes colours faster than a chameleon.

mehak.S 6 years ago double dholki sonali as sooon as she gave to know audience likes gautam she came on his side wow

sharif_lafungi 6 years ago sonali back to manali

OmkaraKiParvati 6 years ago Is this Bigg Bouse House or NOMINATE WHO UPSETS YOU GAME ???? Gautam.. Am telling you.. Play the game alone.. Am damn sure SOnali is not even gonna look at u after Bigg Boss gets over..

bewafa 9 years ago Hahaha BS it's a self-imposed ban

AB probably used his connections...so weird though, they're so publicity hungry...you'd think they wouldn't miss the chance...but then again, this raises curiosity and so...more hype...like it was with the wedding.

urvash 9 years ago I respect Amithabh - but really too much attention is given to Ash and Abhi. I really dont care when and where they have their baby. There are much better issues to discuss. Gosh stop giving so much attention to Ash.

R.A.J 9 years ago D other day i read an article saying Bachchan's were mad at media for speculating dt d baby is gona b born on 11-11-11

I think Akshay wud suit in a negative role very well.