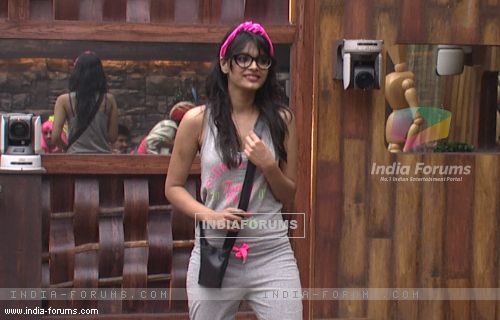 After Sonali and Ali had a tiff last week in Colors' popular reality show Bigg Boss 8, everyone thought that Sonali would maintain distance from Ali but what happened shocked everyone in the house.

We came to know that, Sonali kept on teasing Ali while he was busy doing his work. She tried her level best to irritate Ali to an extent where he became frustrated.

We heard that, Sonali was seen teasing Ali while he was cleaning the garden. She was jumping around Ali to irritate him by passing comments like 'Saaf Karo Aur Saaf Karo.' When Ali asks Sonali not to do so, she blames him saying that he coming in her way."

Further we also heard that, "A frustrated Ali talks to Diandra and Arya Babbar about Sonali raut saying, after making such a big deal about his prank, why is she coming and teasing him while he is busy doing his work. Sonali was seen making fun of him in front of Upen Patel and Minissha Lamba."

arhifan1 6 years ago God she she is so stupid.. i hate ger voice.. hate her face nd hate her laughtrr she has nothin wat an actress is.. she lacks self respect.. nd i think every controversy around ger is fake.. hate that she is gettin most of the footage.. bcos its irritatin.. nd god bless ger english..

Semeira 6 years ago Ali is absolutely right how could she do that ??? Teasing him whereas some days ago she asks him to not joke with her

Natkat 6 years ago Such a loser and dumb. She needs something for attention. All the drama she did telling ali touched her was fake. If u hate some one then why do u keep going back to that person again. Totally disgusting woman will do anything for camera

katherine123 6 years ago Hahaaa... Tit for tat Ali!
You deserve it!