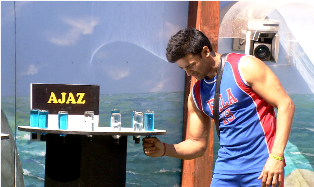 Expect the unexpected; this is a fact on which the Bigg Boss contestants thrive. This week, like every other week, the housemates are required to carry out a luxury budget task but little do they know that this time around, the task is going to mightier than any other so far.

Bigg Boss further makes an announcement that in order to reach the finale week; the housemates will now have to prove their potential and capability on an individual level without the support of any teammate through the task Zindagi Na Milegi Dobara. As a part of the task, the housemates are asked to choose one badge with a contestant's name written on it. They are further asked to hang the badge with the name tag around their neck during the task. In the garden, six stands are placed with each containing ten bottles labeled with a contestant's name.   The housemates are required to strictly abide to the rules of the house and be alert the whole time. They are not allowed to sleep or rest while the task is on.

Upon failing to carry out the task, the person who commits the mistake will not bear the brunt, but rather the one whose name written on the badge will be held responsible for it. For each mistake, one bottle from the stand labeled with that respective contestant's name will be opened and emptied thereby costing them a point. At the end of the task, whosoever is left with maximum number of bottles will get immunity from next week's nominations. Sangram Singh who is already immune from the nominations is asked to regulate the task and take note of all the mistakes that the housemates make from time to time.

It will be interesting to see what new twist this task will bring about amongst the housemates whose lives are now trapped in a bottle...literally!

+ 6
7 years ago Now seeing this week, I am not too sure who deserves to win :/
@dislikers: can you please get a life and learn to respect people's opinion?

7 years ago Immunity from next nominations?? Wasnt yesterday's nominations the last for bb 7??