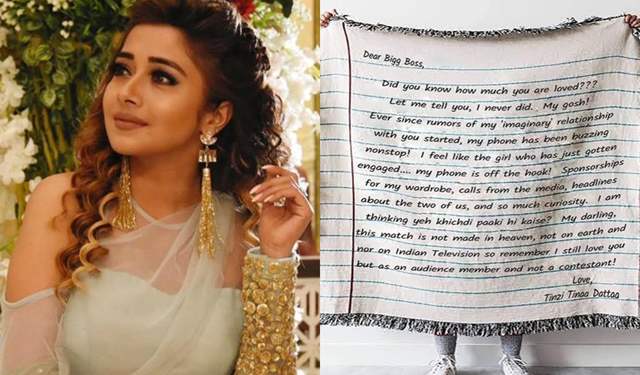 The list of Bigg Boss 14 contestants is not out just yet and while there have been many reports about probable contestants, a confirmed list is yet to be out. Some of the names that have been doing the round as confirmed contestants include the likes of Nishant Malkani, Jasmin Bhasin, Nikki Tamboli, and a few others.

Among the many names that have been doing the rounds, the latest is that of Uttaran actress Tinaa Dattaa. While it has been reported that she will be a part of the show, the actress took to social media to put all those rumours to rest and she had a rather quirky way of doing so.

She went on to write a letter which said, ''Dear Bigg Boss, Did you know how much you are loved? Let me tell you, I never did. My gosh! Ever since rumors of my 'imaginary relationship' with you started, my phone has been buzzing continuously. I feel like the girl who has just gotten engaged...my phone is off the hook.'' She concluded by saying, ''I still love you, but as an audience member and not a contestant.''

Well, it looks like Tinaa has cleared the air around her participation and she couldn't have made it any clearer! What do you have to say about this? Drop your comments below.