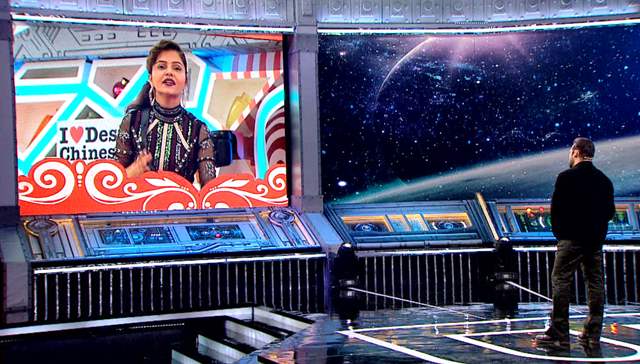 The week that went by was nothing less than a rollercoaster ride with wild card entries, nomination task and the Tabaadla task that brought different traits of each contestant to the fore. Some contestants could manage to sail through the difficult week whereas some got stuck in their own confusions and game plans. The nomination task did not prove to be fruitful for Rahul who passed comments on Jaan being a product of nepotism. Love, friendship, betrayal and controversy were all played out this week. Now it's that time when the host comes on to take stock and clarify the misunderstanding among all the contestants.

In tonight's episode, Salman Khan schools Rahul Vaidya for targeting Jaan Kumar Sanu and calling him a product of nepotism. Salman questions Rahul for his statements and explains that he was in the wrong and shouldn't have used those words. Salman explains to Rahul that if a parent does something for their children, it cannot be labeled as nepotism. He further adds that if Jaan had become a singer because of nepotism, he would have been more successful than Rahul. Salman also questions Rahul by asking him if his children decide to pursue singing as a profession, would he call that nepotism? Salman gets very disappointed with Rahul and takes a firm stand on the nepotism debate and calls it unfair. He also says that no one in the industry can force anything on their kids. Will Rahul understand and accept this mistake?

Next in line is Rubina Dilaik who has been claiming ‘Hinsa’ all through the week. Salman bursts her myths on her game plan and the ‘Hinsa’ that she claims her co-contestants indulge in while doing a task. Salman Khan questions Rubina’s actions and asks her about how she makes her and others’ life difficult by making tall claims? Rubina tries to explain herself but finds herself out of words. Salman explains to Rubina that when she provoked Jasmin to throw water on Rahul, was also an act of ‘Hinsa’ which was totally unnecessary. When Rubina continues with her arguments, an exasperated Salman asks Rubina to run the game show on her own and walks out!

Will Rubina apologize to Salman? Or will she still fight back? Will Rahul apologize for his nepotism comments against Jaan?

Bigg Boss 14: Kamya and VJ Andy side with Kavita, Say no one showed ...

shagun_sarun a month ago This Nepotism debate is useless. In every industry, it exists not just bollywood. Even after the easy access in bollywood, nepotism doesn't guarantee success. End of the day, only talent matters, you tend to be next 'harshvardhan kapoor' even with the nepotism tag and no talent. And real talents like irfan khan, srk, sushant, karik, akshay etc. just surfaces to the top. So people should stop bullshitting about nepotism and start working hard.

john909 a month ago And the truth comes out. Salman defending nepotism makes sense as he is also product of it. An idiot like Salman not understanding what nepotism is makes perfect sense as he himself has launched a bunch of mediocre actors like himself and yet has the gall to defend it.