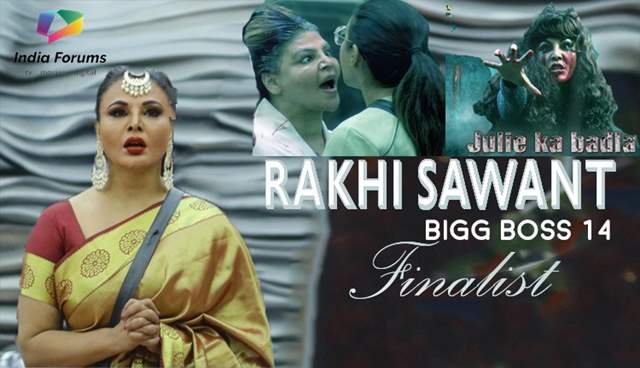 Bigg Boss 14 contestant Rakhi Sawant managed to tickle the funny bones with her antics and while many are rooting for her to win the show, everyone is looking and hoping that she makes it big with the show, in some way or the other.

It did not take a lot for Rakhi to be called an absolute entertainer, but there's a lot that has happened and that she has done. With the show and her journey coming to an end, here are some of the highlights of her journey.

Her equation with Abhinav Shukla

There is no doubting that a lot about her journey has been around the actor and while the antics were fun and enjoyed throughout, a lot did happen between the two as well, where things did not go down well. Though everything was entertaining, she did say a lot of nice things and they had their moments that were cute. A lot was told about how things turned out to be, and while everyone knows that they'd be cordial, all wasn't very well in the end.

She did have a very intense argument with the Naagin 4 actress and though she's had her share of fights and arguments, this one is also a huge one. This again did not go down very well and though Jasmin was hurt and was left crying, Salman Khan revealed that she was indeed hurt and the only reason she did not leave the house was for her want to win.

Her talking about husband Ritesh

A lot has also been said about her marital status and hence, there were a lot of questions that revolved around the same. Though she has spoken a lot about her husband and many came across as a shock, Bigg Boss did urge Rakhi to not reveal such personal details on TV. Later, we also saw her get emotional when she was to get rid of a letter from him and things seemed to have been tough on her.

Her video chat with her mother

One of the most emotional moments was also the one where she spoke to her mother and though she was left worried on knowing about her being in the hospital, it was a sweet moment and left everyone teary-eyed. She also told her that she was proud of her while mentioning that Rakhi is not a liar.

One thing that has been a constant in the house are things that she has done in order to entertain the audience. And well, that's when Julie came in, and she left everyone scared but also in splits. Oh, and then, of course, there was this entire viral video that later turned into a rap for Yashraj Mukhate as well.

Her entry into the finale

Rakhi was not willing to let go and for that, she decided to have money deducted from the winner's account to move ahead. She only wished to reach the finale and hence, became the next finalist in the house.

Now, what's to see is how does this journey of hers come to an end!