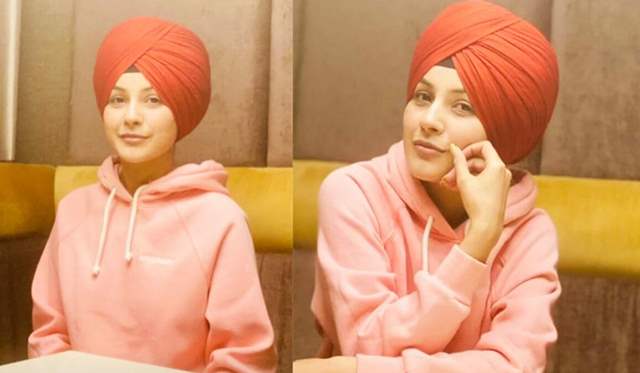 Bigg Boss 13 contestant Shehnaaz Gill has been enjoying her time after the show as she continues to receive a lot of love. Among other things, she has been working on back-to-back videos, and also wrapped up her film with Diljit Dosanjh, Sonam Bajwa, and others, titled Honsla Rakh. She returned to the city recently, as she was shooting in Canada. While her time there, she kept sharing photos and videos on her social media and kept the fans updated with what she has been up to.

Today, Shehnaaz shared some photos wearing a red turban along with a pink hoodie and the fans can't keep calm and neither can they get enough of her photos. Fans have been sharing them on Twitter and across all other social media platforms, praising her and having the nicest of things to say about the photos as well.

Not just the turban look, but fans have also taken to social media to talk about the new bangs that Shehnaaz is seen sporting in further photos on social media. While we don't know if the turban look is anything related to work, for now, fans are absolutely enjoying all the photos that Gill has treated them with!