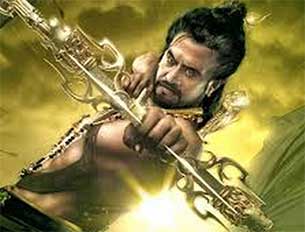 "It's very difficult to find words and put it together, but I would like to say that a woman has directed it. Soundarya has taken a step forward and proved women in India are capable of doing their best," Amitabh said during the launch at a multiplex.

"Rajnikanth and I are very close to each other. We are like family... we have worked together in many films and he has been very humble. When we get time off screen, we discuss life and cinema," he said.

"During 'Robot', he told me he was bored of his work, but I told him 'Please don't stop working'. Look what he has produced now.

"It is unbelievable the way he reinvents himself. He has something new to offer to moviegoers. I would like to say that when the history of Indian cinema is written, it will be before 'Kochadaiiyaan' and after 'Kochadaiiyaan'."

On Rajinikanth's fan following, Amitabh said: "If you wish to witness his fan following, you must go to the south. You can't get tickets of his films on the first day first show as it's completely occupied by his fans. After many attempts, when you get a ticket, you can't hear anything because of the applause and whistles. I hope 'Kochadaiiyaan' is filled for years and years in theatres."

Besides the trailer, a special shoot on the making of the film was also shown.

Praising Soundarya's work, Shekhar Kapur said: "This film is going to be a game changer and your father should be very proud of you today."

However, the leading lady of the film, Deepika Padukone, could not make it to the event.

exclusive
Exclusive Saqib Saleem: It breaks my heart to see Bollywood's ...
8 minutes ago

Bhumi Pednekar admits being Intimidated by Ranveer Singh; ...
10 minutes ago

Naagin 5: Sharad Malhotra talks about romantic scenes with ...
52 minutes ago