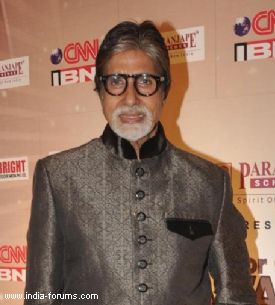 Megastar Amitabh Bachchan has donned a new look for energy drink Complan's campaign, and says it is his "taaqat ka bhooth" (ghost of strength) avatar.

The 71-year-old posted photographs of his look on his blog srbachchan.tumblr.com on Tuesday. He is seen in long hair, spectacles and a white cloak to complete the look.

"It's the 'Taaqat ka bhooth' for the engagement as a celebrity endorsement to a product called 'Complan'," he posted.

He attributes the new avatar to the "handiwork of many stylists".

"The concept of this outlandish clothing was the handiwork of the many stylists that now occupy the space so generously accorded to not just cinema, but the varied other efforts that require a band, a stage and a tentative entertainment platform or stage," he added.

However, Amitabh admits to initially being hesitant to sport the new costume.

"I was very hesitant to put this up for fear of it being run down, but my reasoning on this was that, a great amount of good work was being planned, by others, so there was the reason that I went in the Reliance Studios and did greater and more valid work," he posted.

Amitabh can be seen in campaigns of products like Daawat Basmati Rice, Maggie and Parle's Gold Star cookies, among others.

Malaika Arora shares her biggest challenges upon Testing ...
30 minutes ago