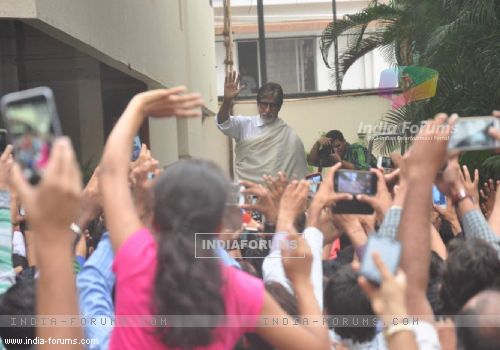 Megastar Amitabh Bachchan, who has a meet and greet session with his fans every Sunday, says it worries him to see women and children in discomfort due to the crowd. He has sought the help of police for a "simpler and effective" way of managing the weekly gathering in front of his residence Jalsa here.

"It is another Sunday and the rains have been silent for a while...and the wishers and well beings of my life gather outside the gates of Jalsa and in heavy multitudes and in some unpredictable crowd planning ...it worries me no end when the little children and the ladies are subjected to discomfort...," the 72-year-old posted on his blog.

Keeping this in mind, Big B made sure that his female fans and children face no difficulty while being part of such a huge turnout of people.

"So .. I have had a word with the police and they shall plan out a more simpler yet effective way of dealing with the situation...a situation that really is filled with so much passion and affection that at times it feels awkward to prevent them from expressing themselves," he added.

Fans gather outside Jalsa, Amitabh's house, every Sunday morning and the "Paa" star makes sure that he acknowledges the love and respect by sharing photographs of the Sunday ritual on his official pages on various social networking platforms.

He also mentioned the efforts of youngster who designed a paper book that was presented to the megastar at the gate. The paperbook had photographs of "Madhushala", his father Harivanshrai Bachchan's book, and of "Piku", Amitabh's last released film.