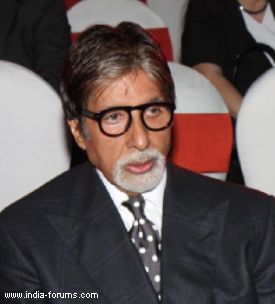 Megastar Amitabh Bachchan was honoured with the Star of the Millennium award at the Big Star Entertainment Awards 2013 here. He says he was "embarrassed" when the audience stood for him as he received the award.

The 71-year-old received the award for his movie "Satyagraha" at the event held at the Andheri Sports Complex here Wednesday.

"The audience stands for me...So embarrassing to be in front of them. I quickly gesticulate to them to be seated...some did, others did not...still embarrassing," Amitabh posted on his blog srbachchan.tumblr.com Wednesday.

The fourth edition of Big Star Entertainment Awards was co-hosted by funnyman Sunil Grover and actor Shreyas Talpade. The duo had the audience in splits with their entertaining on-stage camaraderie.

The Big Star Entertainment Awards 2013 will air Dec 31 on Star Plus.

Kangana Opens Up on Instances of 'Big Heroes' Sexually ...
54 minutes ago