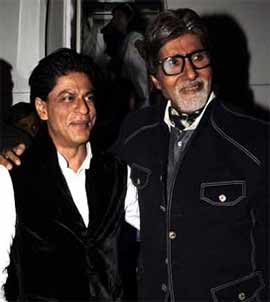 Megastar Amitabh Bachchan says he did not feel that it was a good idea to perform with superstar Shah Rukh Khan at the 20th Annual Life OK Screen Awards, but hopes they can do an act together in future.

The 71-year-old will be honoured with the Lifetime Achievement Award at the Screen Awards, hosted by SRK, but did not think it will be a good idea to perform at the event with SRK here Tuesday evening.

"Soon after the work, there were meetings in the house...with Shah Rukh Khan! There is this small matter of a Lifetime Achievement Award coming my way at the Screen Awards to be held on the 14th, tomorrow night (Tuesday), and to be able to do an act with SRK...but I felt later on that this would not be a good idea," Amitabh posted on his blog srbachchan.tumblr.com.

"The basics though work! And I do hope that Shah Rukh and I get to do this act someday together, on a later, much later!" he added.

They have acted together in films like "Kabhi Alvida Naa Kehna", "Kabhi Khushi Kabhie Gham" and "Mohabbatein".