Mumbai, Dec 29 (IANS) If Shirish Kunder is making a film with Amitabh Bachchan, his wife, director Farah Khan, is teaching their little son to recite Big B's famous 'Walk In English, Talk In English' speech from 'Namak Halaal' to improve his English. 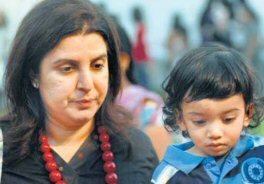 Apparently Big B has inadvertently aided Czar's enhanced performance in school. When Czar was under-performing in his English speech, it was Big B's famous monologue that came to the child's rescue.

'I taught it to him. You see, Czar's teachers told me he only spoke in Hindi and Marathi. I was advised to encourage him to speak in English. So I taught him Amitji's 'Namak Halaal' monologue which according to me is a most comprehensive English primer for any child. Filmy maa hoon na,' said Farah, who gave birth to triplets in February 2008. She has two daughters and son Czar

On Wednesday at the house-warming party at Farah's place, Czar got his chance to have his say in front of the man who came to his rescue in school.

Czar recited his 'Namak Halaal' monologue, much to the Big B's delight as he realised that a new generation of Bachchan fans in the tiny-tot section is gearing to keep the legend going.

Kunder's film with Amitabh is titled 'The Common Man'.

Incidentally, Farah's chum Sanjay Leela Bhansali, who is not a kids person, gets on famously with Czar. Sanjay has promised to launch Czar as a hero.