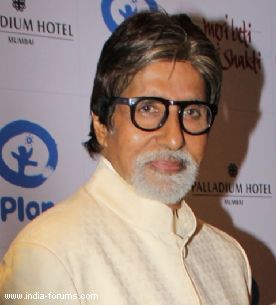 "I want to thank Times Now (news channel) and ICICI Bank for honouring me with this (NRI) award," Big B told reporters Monday here at the awards red carpet.

"I think I am not the only one person who should be honoured with this award. In fact, there are many of my friends in the entertainment world, especially the actors of the younger generation because of whom our film industry is known in the whole world, so I would like to dedicate this award to them," he added.

The awards, presented by Times Now in association with ICICI Bank, were given to the achievers who have made their mark internationally.

Meanwhile, Big B, who made his movie debut with "Saat Hindustani" in 1969, recalled his early career and said: "During that time (when I started my career) I didn't have much releases, but I started doing the stage shows (the world over) around 1980s and then I came to know how much we (actors) are loved by them (people outside India) and how much we love them."

"Since then it is still continuing and...I would like to thank them all," he added.

Currently, the megastar is busy promoting his next "Bhootnath Returns", slated to release April 11.