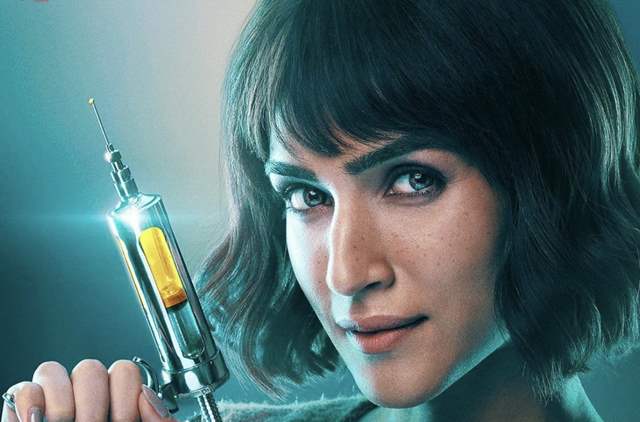 Since the day Bhediya was announced, fans have been speculating about the story and what the film has to offer. The film has already generated a buzz and now that the teaser of the film is out, makers are trying to keep up the hype by offering other details to the fans. Today, Kriti Sanon’s character look from the film has been revealed and it has caused a stir on social media. The actress is seen in a totally fresh avatar which none of us have seen before. In the poster, she is seen giving a sly look with fringes as her hairdo and is seen carrying an injection lookalike tool in her hands.

Yesterday, Varun’s look was unveiled through the poster and his intense and terrified gaze got viewers more intrigued about the film.

The trailer of the film will be releasing tomorrow.

Amar Kaushik's Bhediya is billed as a horror-comedy film. Dinesh Vijan produced the film which will be hitting the screens on November 25, 2022. It is also said to be the third episode of Vijan's horror-comedy universe.

The majority of the performers in Bhediya, including, Jomin, the principal character, are from Arunachal Pradesh. K4 Kheko, an Arunachal rapper, will also appear in the film.

On the professional front, Varun Dhawan will next be seen in 'Bawaal' alongside Janhvi Kapoor. Kriti on the other hand has a bunch of projects lined up like,  'Adipurush' and 'Shehzada'.