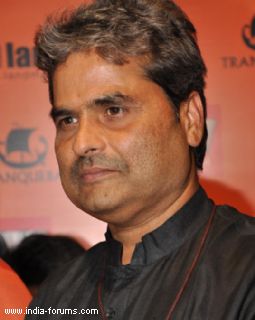 Leander Paes' performance on the tennis court has made Vishal Bharadwaj sure that the sportsman will be good on the big screen too! The filmmaker has decided to make a film with the tennis star who is already making his debut with 'Rajdhani Express'.

'What I feel is that he is such a fighter in the game that he will be good on screen too and I am 100 percent sure of that. So, I will write a script for him now,' said Bhardwaj at the inauguration of a lawn tennis court here.

Even Paes hopes to work with Bhardwaj, known for films like 'Maqbool', 'Kaminey' and '7 Khoon Maaf'.

'If I ever get a chance to work with him, it will be a great honour. I really hope that the day comes but before that I have to prove myself,' said Paes.

'I want to prove that I can act well and hold my movie and give him a realistic opportunity to put me in his movies. I really look forward to that,' added the 38-year-old tennis player whose debut 'Rajdhani Express', directed by Ashok Kohli, also stars Paresh Rawal.

Leander Paes, who dated actress Mahima Chaudhry, is married to Rhea Pillai and they have a daughter.