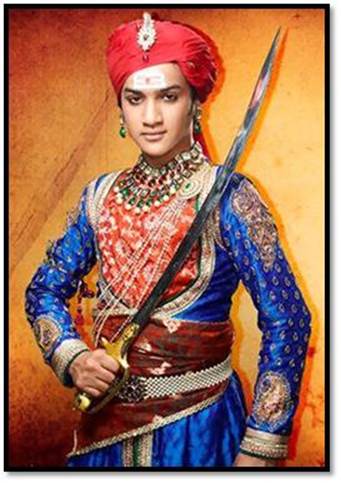 Mewar's history would have never been the same if it didn't give birth to the courageous warrior Maharana Pratap who stood for his motherland. In the history of Mewar, Pratap (Faisal l Khan) first demonstrated his bravery by defeating the cruel Shams Khan.

To avenge his friend's death, Pratap headed towards Shams' army single handedly and stabbed him to death in a sword fight. Pratap's struggle didn't end here. Living up to his mother's promise, the royal prince chose a life of simplicity. It was the turning point in history when young Pratap lived the life of a common man and discovered the sorrows of commoners.

Following his mother's concern, Pratap donned a new avatar of 'Sakha Veer' to fight for the defenseless common masses against injustice. The fight for his motherland continued when Rao Surtan and Bairam Khan (Shahbaz Khan) invaded Mewar with evil intension resulting in the dangerous Bundi War.  The dreaded Bundi war ended with Pratap succeeding in capturing Bairam Khan.

History is replete with stories of valor and courage about great leaders, but it is rare to find a leader like Maharana Pratap and his loyal followers who braved hardships and sacrificed immensely to save their beloved kingdom. Maharana Pratap, a glorious and magnificent personality is the embodiment of chivalry, perseverance, bravery, self-respect, patriotism and the spirit of independence. The courageous Rajput of the Sisodia clan is a standalone fighter against Mughal aggression who never bent down to any temptation. He is loved by his men and they stood by him in his fight for independence. Pratap faced extreme hardship living the life of a fugitive but never gave up his struggle for freedom.

This brave heart warrior is all geared up for the Maha war.  Kunwar Pratap is all set to pick up the weapons against the powerful army of Akbar (Vishal N. Jethwa) who will aggressively invade the territory of Rajputana with the aim of acquiring it. Pratap will stand in between to face the huge army to protect the aan, baan and shaan of Rajputana.
16 Likes

Sejal. 6 years ago Maharana Pratap is the best..!!
Faisal Khan u rock it !!

Annarichard 6 years ago Faisal is amazing in his portrayal of mahrana pratap. He has set a benchmark and it'll be extremely difficult to accept anyone else in his place. Will miss him soo much after the leap :(

Sizzling_Sia 6 years ago Faisal Khan is a very talented kid ..love him !!

Deepika.31 6 years ago Faisal is such a wonderful actor! Keep improving the show Faisal! Much love to both you and the show!

Annarichard 6 years ago There are not enough words to describe what a marvellpus person Maharana Pratap was. He'll always be an inspiration for today's generation. He instills patriotism in all of us through his exemplary life.

Bhawana01 6 years ago Maharana pratap was the best &lt;3
Faisal you rock my boy :)
Love you so much &lt;3