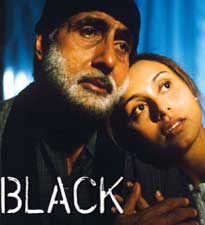 Distributed worldwide by Yash Raj Films (YRF), the Amitabh Bachchan and Rani Mukerji starrer that had a worldwide release Feb 4, 2005, opened in Korea Aug 28 across 180 screens, said a statement released from the production house here Thursday.


Touted as one of the biggest release for a Hindi movie in Korea, 'Black' debuted at the third spot at the Korean box office alongside local blockbusters 'Take-Off' and 'Haeundae' occupying the first two spots, respectively.


Loosely based on Helen Keller's autobiography 'The Story of My Life', the film revolves around a blind, deaf and mute girl, and her relationship with her teacher who later suffers from Alzheimer's disease.


The film was released in the Korean market as YRFs strategy to open doors for 'Indian cinema in non-traditional territories'.