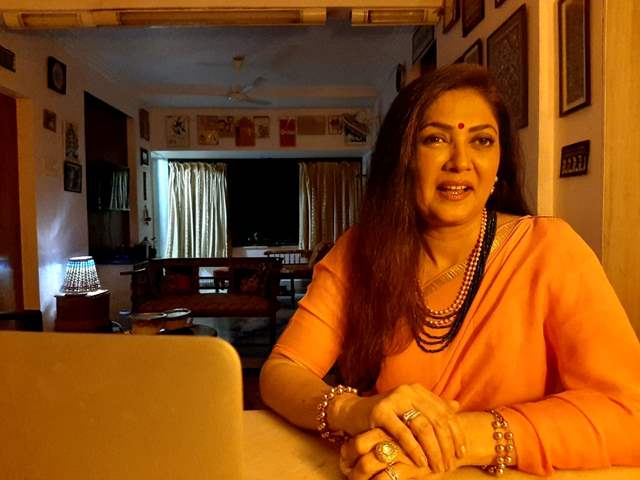 The web fiction show Bhalla Calling Bhalla was conceptualized, shot, edited, and released in the Lockdown itself. Well, it certainly was a new thing and everyone was getting used to this style of shooting, there was a hiccup that got the cast and crew in a fix. Noted actresses Lubna Salim caught an eye infection and instead of taking a break, she decided to shoot in spite of it as they had a tight timeline.

Lubna Salim shares, "We were all set and I was shooting the 11th episode, I felt a little swelling on the eye and in a day’s time it flared up into a sty. We gave it a day’s rest but it just grew to be worse. I consulted a doctor and was put on antibiotics and tried getting rid of it in various ways. I put make-up in the morning but it wasn’t really hiding. I suggested instead of hiding it or giving it different angles it's better we face it because it's better to do that. The problem was if we had time we could have given it a few days to subside but we did not have time because we were at the end of the shoot hence we had to speed up the process. And for this reason we had go incorporate a scene in the beginning of the episode where I just look into the mirror and say 'Oh god what am I going to do of this infection'.

She added, "The best thing that happened to me was that my cameraman Salim did such a wonderful job with angles that the eye was not shown much and my luck that the lights were sufficient to cover the sty too as right now we are shooting in whatever lights are available at home. We could not completely hide it but could ignore it so you would not see much difference in episode 11 & 12. The production, the director were very understanding and the writers were ready to incorporate it even though there was no time to do it. But for me shooting was very difficult, the pain, the swelling, seeing with half an eye and to top it all the heat. It was quite painful and I could not put make-up too because of the eye hence we went for the no make-up look so I just concealed it a little and that's how we shot."

Nitin Jai Shukla, producer spearheading The Blackboard Films shares,  "We asked Lubnaji if she would want us to remove her from the scene, and she could take a break for a day. But she insisted and kept her commitment as she knew that last two episodes were very critical for summing up the whole series. She took ice pack during shoots and shot the sequence. In fact it was Eid on that day and with so much personal work and this eye infection she still managed the shoot."

Nikita Parikh who conceptualised and is also the creative producer of Bhalla Calling Bhalla shares, "When she informed me about her eye infection I was shocked and tensed. Of course we can’t remove her from the finale episodes and can’t push her to shoot also. But she is so committed that she said no matter what I will finish the shoot on time as we have to submit the episodes in two days. She only came up with an idea to improvise the eye infection in the script. She was in immense pain but she finished the scene on time. I bet no one can figure that she is in pain, she did it so effortlessly that it seemed it was a part of the script. And for the scene she dressed up in a saree, cooked biryani & kheer as well."