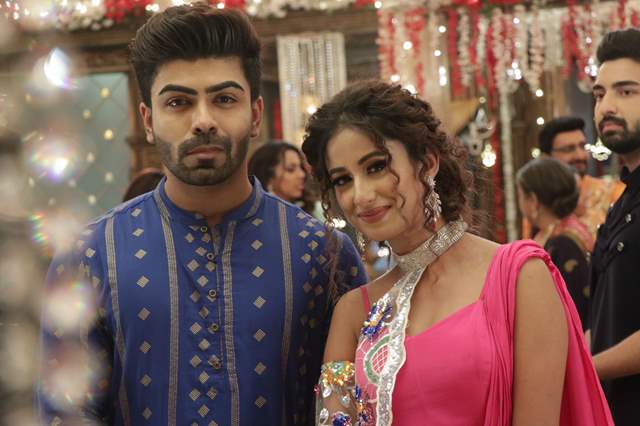 After several extremely successful collaborations, Zee TV and Balaji Telefilms recently launched an exciting new show about life, love, karma, and destiny. Set against the backdrop of Mumbai, 'Bhagya Lakshmi' follows the journey of Lakshmi, a selfless girl of limited means, who despite her humble background and the curveballs life has thrown at her, always puts others’ needs before hers. While the show had already impressed the audience with its intriguing storyline and relatable characters, Mallishka’s (Maera Mishra) entry into the show as Rishi’s love interest spiced up everything. But looks like there's more drama in store for everyone as Akash Choudhry has recently entered the show.

Akash is seen essaying the role of Maera's close friend - Viraj Singhania. He is Rishi and Mallishka’s childhood friend who studied together till 11th grade, but Viraj moved abroad for further studies, he lost touch with Rishi. Viraj and Mallikshka, however, remained in touch and with his return to India, we're all set to witness a lot of drama, twists and turns. And looks like Akash is quite excited about his new role! The actor, who is a former publicist turned model, is, in fact, making his fiction show debut with Balaji Telefilms' Bhagya Lakshmi and is over the moon for getting such a huge opportunity.

Talking about his debut, Akash said, “Ever since I was a kid, my dream was to be famous. I always loved the attention, loved being at the centre of the stage and getting all the limelight at events and parties. But while I wanted to be a public figure, I never thought I would become an actor. In fact, I was working as a publicist for a lifestyle brand for a couple of years when my clients approached me to shoot for them. That is how my journey of becoming an actor started. At the same time, I shifted to Bombay and decided to take up acting. While I've done a couple of ads and a non-fiction show, Bhagya Lakshmi is my first ever fiction show, and I am so glad I am working for a Balaji and Zee TV show. The show is amazing, I've been following it closely. Getting a chance to be a part of this show is really surreal and I can't wait to entertain the audience."

He further added, "I just recently started shooting for Bhagya Lakshmi and all my co-stars are really fun. I am really looking forward to playing Viraj’s character in the show and I hope everyone accepts him and showers some appreciation. I must add that it has always been my dream since I became an actor to work with a production house like Balaji Telefilms and Ekta ma’am as she is the queen of television. In fact, my mom is very happy as she is a die-hard fan of Ekta ma’am, and she always wanted me to do a Balaji show. I am really glad that my dream is coming true, and I shall surely give my best for this show!”

While we are all excited to see Akash Choudhary in his fiction show debut, it will be interesting to see what twists and turns he brings in the upcoming episodes of Bhagya Lakshmi.