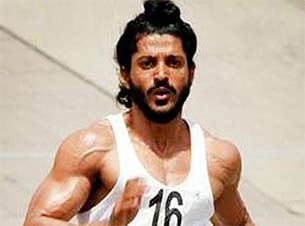 Farhan Akhtar-starrer "Bhaag Milkha Bhaag", a biopic on former athlete Milkha Singh, has bagged a maximum of 10 nominations for the International Indian Film Academy (IIFA) Awards, to be held in Tampa Bay, Florida later this year.

The nominations of the popular category for the 15th edition of the extravaganza, touted to be Indian cinema's most spectacular awards outside the country, were announced Thursday.

Other appreciated films of 2013 - "Krrish 3", "Chennai Express", "Kai Po Che!" and "The Lunchbox" have been nominated across various award categories for the awards, the winners of which will be announced at the Raymond James Stadium in Tampa Bay April 26.

Deepika Padukone steals the limelight in the performance in a leading role (female) category with three nominations for her work in "... Ram-Leela", "Chennai Express" and "Yeh Jawaani Hai Deewani". Other contenders are Sonakshi Sinha ("Lootera"), Nimrat Kaur ("The Lunchbox") and Shraddha Kapoor ("Aashiqui 2").

The Videocon D2H IIFA Weekend, to be presented by Tata Motors, will be held April 23-26.