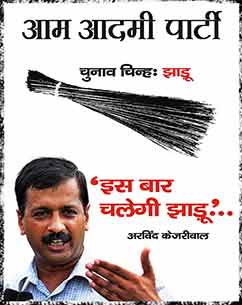 Bollywood celebrities compare debutant Aam Aadmi Party (AAP), which has surprised everyone by winning 28 seats in the Delhi assembly elections, performance with an underdog movie and say that politics is as unpredictable as a film's fate at the box office.

They took to Twitter to express their views on the latest polling results and AAP's master stroke. This is what they have to say:

Preity Zinta: And the best debut award goes to Arvind Kejriwal and the AAP! Must confess its inspiring to see these results. Here's to new beginnings. Now work begins for AAP. I sincerely hope they move forward and form a government with BJP (Bharatiya Janata Party) in Delhi and not take a step back and have a re-election! AAP is a perfect example of how hard work and good intent will find a way to win.

Vishal Dadlani: Arvind Kejriwal I am just happy and proud to be part of the Aam Aadmi Party movement and of a time that will define India's future!

Ronnie Screwvala: Good step by AAP to consider re-elections - shows test of ideology and also a very smart move, as now it may go to the next level!

Chetan Bhagat: Morally AAP victory. BJP can ask for whatever conditions AAP may have and offer unconditional support. We will get to see what AAP can do.

Soni Razdan: AAP could be the best thing to happen to India in a long time.