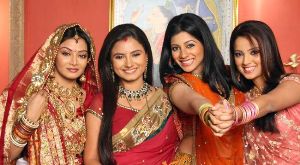 Hats Off Productions' Behenein has been doing quite well for the channel and the show has apparently got an extension now!! There was a buzz that Behenein might get changed to an afternoon time slot, but the channel seems to have decided otherwise!!

Behenein's ratings has been very consistent and they have a lot of drama element to play on. Considering all this, the show will now be moved to the 6 PM slot in order to provide competition to the other shows slotted at the same time slot. With Zee TV's new launch at the 6 PM slot Bhagonwali - Baante Apni Taqdeer failing to garner more eyeballs, it seems to be a good strategy employed by Star Plus..

A little birdie chirps, "There was a rumor that Behenein might go off, but it was just a rumour. We have been doing well and there was no doubt of our show getting an extension. We have now got an extension of six months, but will be moving to an early evening slot soon".

Sabki Laadli Bebo which airs at 6.30 PM is also doing well, so Behenein might get the 6.00PM slot.

Our source states, "The new UTV show Dor which has Rohit Khurana as the lead will be launching on February 14th and will take the 8.30 PM slot".

We talked to Producer Jamnadas Majethia on this and he says, "Yes, it has been confirmed that Behenein will be shifting to pre-prime slot and will be getting either of the two timings between  6 to 6:30 PM as the show is doing well with the ratings."

This move will certainly boost the GRP of the channel, what with a new show and an already established show providing more competition...

pradeepraghavan 9 years ago The show is satisfactory. So, i can't comment on this news. But i am sure that it will bring Bhagonwali's ratings down.

arunima_LUIT 9 years ago behnein is so boring ..gud that dor will b there:)

saraaa. 9 years ago I am honestly surprised that Behenein is doing SO WELL in general ... With a lot of new shows coming on SP, this should be a show that the channel should consider ending! The 'plot' is just not there anymore

k121op 9 years ago Behnein is a great show...it got quiet interesting in the past few weeks...esp bcoz of Akashi and Shamad's tragedy...but StarPlus should have replaced Kaali at 11pm slot with Behenien instead...6pm is too early,but i am glad that it is not ending so soon,and it aint shifting to the noon segment...StarPlus should end Ladli nd Gulal sucks!They bore me to death,but Aakashi in Behnein saves me from my slumber...

-.Priya.- 9 years ago yeah exactly behnein was never doing well
after kis desh no show at 8 :30 pm did well for SP
liars!!!

Alpha_Ka_Gamma 9 years ago Behenein doing well???...wat the show never gets 3+ trps..//Laagi Tujhse Lagan is rite now d leader of 8:30pm slot.....looks like Star plus can never get good shows on 8:30pm slot after Kis des and Kasauti.......Tere mere Sapne,Sajan Ghar Jaana hai Behenein.........these all shows did nothing in this 8:30pm slot

-Preeti- 9 years ago SO waiting for Dor ...... Finally something good to watch