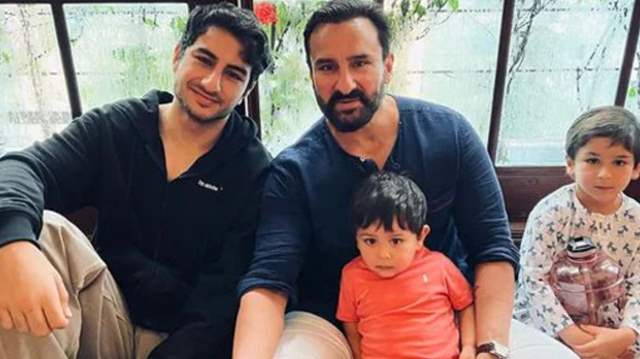 Saif Ali Khan and Kareena Kapoor Khan are among the most popular couples in Bollywood. Fans eagerly wait to see their pictures on social media and everyone enjoys how the entire family gets together for special events.

Bebo actually gets along well with Sara Ali Khan and Ibrahim Ali Khan as well. Saba Pataudi, Bebo's sister-in-law, frequently posts unseen images to her Instagram account and we bet this picture of the Khan family's four boys, which she shared today as well, will delight you.

Saif Ali Khan is seen in the image sporting a blue kurta over a white pyjama. He clutches his glasses in one hand while smiling. Standing next to him is Ibrahim Ali Khan, who resembles his father in every way. He too is clad in a light denim jacket and a dark blue sweatshirt. He is holding Taimur Ali Khan, who is decked in a sweet white kurta pyjamas, in one hand, and Jehangir Ali Khan, the younger son of Kareena Kapoor Khan, in the other.

Since the announcement of his upcoming film Vikram Vedha, Saif Ali Khan has been the focus of attention.  Fans are eagerly awaiting the Hindi remake of the Tamil film with the same name, for which Saif and Hrithik Roshan will  step in the shoes of R Madhavan and Vijay Sethupathi. Along with Kriti Sanon, Prabhas, and Sunny Singh, Saif Ali Khan also stars in the pan-Indian movie Adipurush.