View Profile
Throwing around rumours is not something new in the land of Bollywood. Even more than that, it's not uncommon to see actresses pit against one another, espe 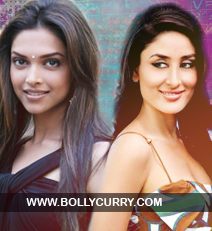 cially when it's jealousy speaking. The actresses that are currently on the outs are leading ladies, Kareena Kapoor and Deepika Padukone.
Rumors have it that Deepika has gone around claiming to any open ears that she was the first choice for the "Chamak Challo" song sequence her upcoming flick, Ra.One. She goes as far as to say that Shahrukh Khan had her in mind as the number one choice for this item song.
As we all know, Kareena is not one to sit back and listen. After hearing such rumors, she denied the false news and claimed that Deepika is only creating a ruckus to gain fame for the Dum Maaro Dum title track, an item song which never really got the response that was expected from it.
What's more surprising is that "Chamak Challo" isn't even an item number. The song belongs to the character that Kareena will be portraying in the film. The question that now arises is, how could Deepika have ever been considered for the said song if no such sequence has been planned for the film? Even the director of Ra.One, Anubhav Sinha, claims that Deepika had never been approached for an item song in the film.
Ra.One is an upcoming Hindi science-fiction super hero movie featuring Shahrukh Khan, Kareena Kapoor and Arjun Rampal. The film is set for release on October 26, 2011.
Will these false rumors to gain fame now begin a cat fight between Bebo and Deepika? What do you think?