View Profile
After Aishwarya Rai Bachchan stepped out of Madhur Bhandarkar's ambitious project Heroine, the director did face some set back in his plans; until along came Kareena Kapoor to step into the shoes! 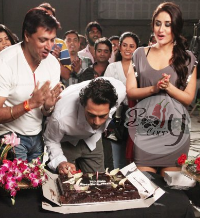 Ask Bebo about being a second choice, and she points out how the movie had been offered to her initially, but she had to turn it down then owing to date clashes. However, having landed right back into her kitty this second time, Kareena believes Heroine was meant to be her project.

Co-starring Arjun Rampal, the shooting for Bhandarkar's project has already commenced with a kick off party at the sets in Film City, Mumbai on day one. Kareena who made a mark becoming the first size zero lady among her generation of divas is expected to counter that image with a more filled out and curvy avatar for Heroine. The actress is heard to be working on gaining the pounds this time hence!

Size zero or not, we think Bebo will still be supremely hot! Here's wishing the team the best of luck!