Wedding fever has hit the nation. With couples tying the sacred matrimonial knot left, right and center, the competition of making your outfit stand out is more potent than ever, especially amongst the to-be-wed female population. To help these ladies find inspiration, what better source than Bollywood's own heroines dressed for their on-screen D-day? Reminisce with us as BollyCurry takes a look at our darling Bollywood brides and their various bridal outfits. 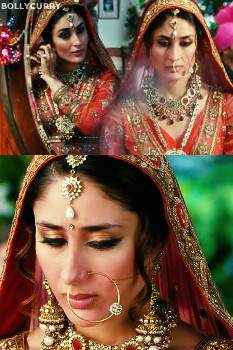 The audience cried in agony when Kapoor's character almost married her idiot of a fiance instead of Aamir Khan's adorable character. The pretty lass wore a heavy brown-orange anarkali styled lehenga with sequins, beads, dabka and Swarovski crystals and pearl-golden jewellery to match; she looked nothing less than the title of a royal she carries in real life. And let's not forget the sight that was beheld when she rode a scooty to her beloved in her embroidered outfit, that too with a matching helmet!
Kajol Devgn - My Name Is Khan 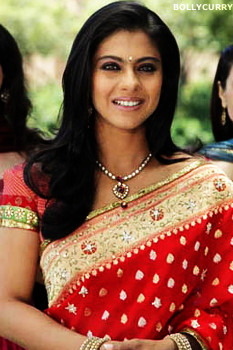 Portraying a working lone parent of one and a second time bride when her character falls in love again, it didn't come as surprise that Kajol's bridal look was not over-the-top. Draped in a simple yet gorgeous bright red saree with a detailed gold border, the world stopped and stared when she flipped her luscious curls and let us witness her beauty. An uncomplicated pendant and smoky eyes to highlight their ravishing depth and the result is that Kajol looked utterly divine.
Aishwarya Rai Bachchan - Jodhaa Akbar 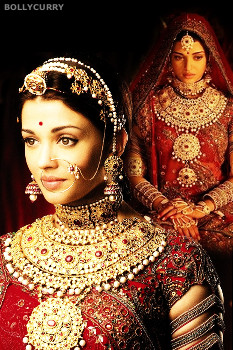 A Rajput queen marries a Mughal emperor and immediately you know the affair will be a grand one. Rai's bridal outfit, designed by Neeta Lulla and jewellery created by Tanishq, had people in a frenzy asking how they could get their hands on such pieces. The Rajasthani ensemble was a perfect balance of embroidered fabric with antique zardozi, kundan and embedded stones in warm hues of saffron, emerald, copper, brown and henna red. The simple makeup in contrast to the heaviness of the outfit was also a huge hit.
Priyanka Chopra - Kaminey 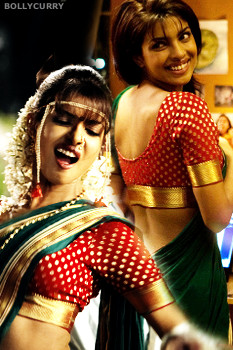 By far the simplest bridal outfit in this list but we can't say it's the most boring, not with Chopra's fun attitude riding in par. Playing a Maharashtria navri, Chopra donned a plain green nine-yard, Banarasi saree draped in the typical Marathi kasta style. Teamed with a daring red blouse with gold print work and border, flowers in her hair and entertainment in abundance, Chopra made one happily fulfilled bride.
Preity Zinta - Veer Zaara 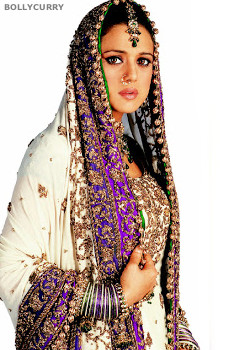 Playing a Muslim girl entering an unhappy marriage due to her heart belonging to another, Zinta made for a discontent but beautiful bride nonetheless. Designed by Manish Malhotra, the ethereal satin/silk lehenga with zardosi work was a lovely retro gift to the times gone by, especially the beaded fringe on the dupatta. The white base was a pleasant difference to the traditional red, which overall harmonized the deep plum and green tones. What caught our eye however is the small and elegant nath against the minimal makeup.
Deepika Padukone - Chennai Express 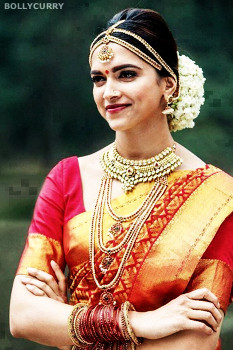 Include a wedding sequence and the movie is sure to be an entertainer. Include a runaway bride and the movie is sure to be a masala entertainer. Padukone, on the run from her father, the leader of a mafia mob in Tamil Nadu, dresses in a traditional golden-red Kanjeevaram silk saree with a complimentary coral blouse. Accessorized with gajra, kamarbandh, maang tikka and coin necklaces, Padukone looked every bit the ravishing South Indian bride.
Rani Mukherjee - Kabhi Alvida Naa Kehna 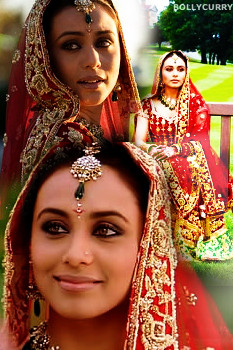 Those who love the classical route, this is for you. Sitting and contemplating her impending marriage, Mukherji's bridal couture outfit bewitched the audience. A Manish Malhotra creation, the zardozi-rich lehenga shines bright in the auspicious colors of the traditional red and green. Complete with maang tikka and jingling kaleere, who wouldn't want to mirror Mukherji's look in real life? What we love the most however, is the simplicity of the makeup and jewelry in bid to keep the attention on the outfit.
Nargis Fakhri - Rockstar 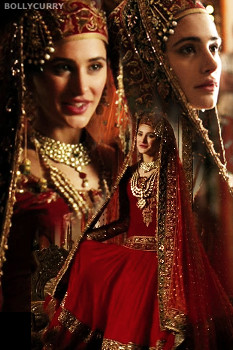 The most stunning Kashmiri bride ever witnessed, Fakhri carries the on-screen beacon for the region well. Playing a Kashmiri pandit, she looked astonishing in a red lehenga with zardozi embroidery, teamed with an orange dupatta inclusive of a red and green border. We absolutely love the authentic addition of the traditional headgear called a tarang. Neutral makeup and exotic kundan jewellery, Fakhri looked a million bucks as she stole our hearts.
Katrina Kaif - Namastey London 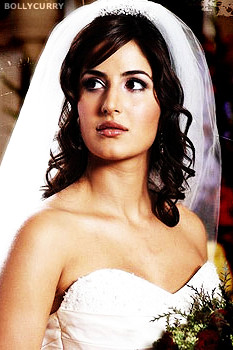 Sourcing the perfect Christian white gown is almost as hectic as finding the perfect ethnic Indian wear. The aim is to keep the ensemble as simple as possible but to make it stand out amongst all the other colors in the vicinity. Kaif's gown is a great example. Playing a pampered bride born and bred in London and realizing a rustic Punjabi lad has stolen her heart rather than the long term boyfriend who stands at the wedding altar with her, Kaif runs with her fairy tale strapless white gown and a veil billowing behind her. Minimal make up and no jewelry besides a pair of earrings, she definitely was a head turner.
Other beautiful Bollywood brides include: Asin Thottumkal in Ready, Ayesha Takia in Salaam-E-Ishq, Karisma Kapoor in Zubeida, Mahie Gill in Dev D, Lisa Haydon in Aisha, Anushka Sharma in Rab Ne Bana Di Jodi, and Amrita Rao in Vivah along with many others.
We hope the above tiny list gave the to-be-weds some inspiration. A particular bridal ensemble you envy? Who did we scandalously miss? Let us know in the comments section below and we'll be sure to read them!
Author: Jenifer Y.
Editors: Saraa K. and Hershi J.
Graphics: Marsh P.
Have a suggestion or comment for BollyCurry? Then drop us a PM at BC_Dropbox today!
25 Likes