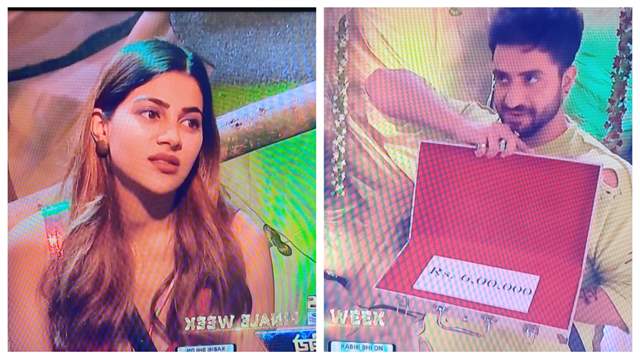 Bigg Boss 14 is just over a few days from concluding which means the finale is only a while away. Today was all about the sweet moments between the contestants where they had a lot of fun with the cupid task and it was then followed by Abhinav Shukla coming in the show and having a date with Rubina Dilaik.

The sweet moments between Dilaik and Shukla will continue even tomorrow but also have the contestants make tough choices to earn big things. While Aly Goni's wish is to talk with his mother on video call, Rakhi Sawant will have a choice to sacrifice a hand-written letter from Ritesh.

Rahul Vaidya will have to sacrifice something from Disha Parmar and such other instances. However, the biggest instance will be about Nikki Tamboli given a choice to take Rs 6 lakhs right away but thus meaning that she has to leave the show immediately and is out of the running for the trophy.

Recent reports suggest that Tamboli will decide to take the money and thus meaning that she is out of the show.

Whether or not this is a good decision is up for a debate.

Joel Rey 2 months ago Nikki Tamboli passes stools in the toilet every morning. I wash her sexy dirty shit hole.