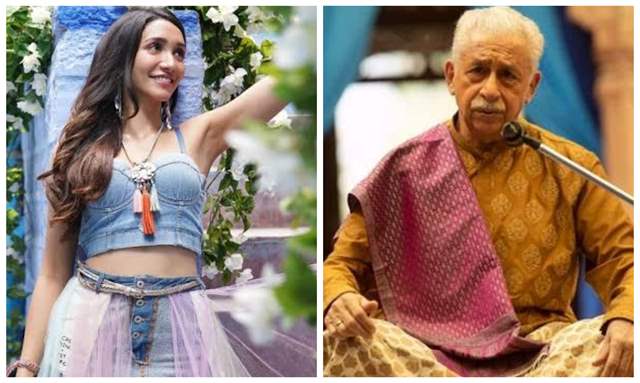 With a shift to the digital era,  filmmakers are now introducing the world to an array of fresh talents, making stellar additions to the fraternity. The newest star to be a part of this clan is the  tinsel town diva ‘Shreya Chaudhry' who has been wooing the audience since her outstanding act in 'Bandish Bandits'.

With mind-blowing performances, actora have successfully carved a special place in the hearts of the audiences and the actors too. One such example is the legendary actor Naseeruddin Shah, the ultimate man of mimetic art and a cult figure who has truly inspired individuals becoming a role model and a mentor to the emerging stars. Well, this is true and Shreya aims to learn as much ever since she got a chance to work with veteran actor Naseeruddin Shah.

Talking about Naseeruddin shah, Shreya mentions, "Naseeruddin Sir is a legend, and I am grateful that I had the opportunity to watch him create his magic live. It’s definitely an unforgettable memory and I’ll cherish it forever. While we were shooting for Bandish Bandits, I got a chance to observe and hopefully learn a thing or two. I feel very lucky that I got to interact with him, discuss movies and acting and had the opportunity of a lifetime to do a workshop with him. He’s not just one of the country’s best actors but one of the nicest and warmest people I have met.  Naseer sir today is not just a legendary actor I have immense love and respect for but also a friend and teacher. I hope I get more opportunities I the future to work with him again.”