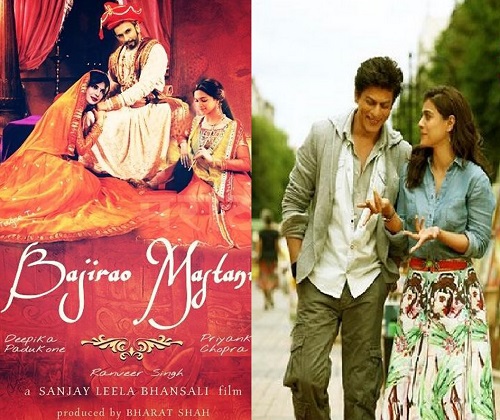 As reported earlier, there were speculations of Sanjay Leela Bhansali's Bajirao Mastani was to postpone it's release date to 2016. But now it is confirmed that Sanjay Leela Bhansali wouldn't shift the release of his most ambitious project.
This means Bajirao will be pitted against Diwale this winter.
Now will the audience go in for a period film or the super hit SRK-Kajol jodi back on screen, only the box-office numbers would tell.
Keep reading this space for more updates.

5 years ago SLB why are you axing your own foot? Need I remind you what happened to Saawariya 8 years ago? Please wake up and see the reality! All the best to SRK and team Dilwale!!

5 years ago Wish ll the best,SRK and Kajol,u will surely rock the screen together!
And am sure that Dilwale will be unbeatable!!

Of course SRK and Kajol are unbeatable!!!

+ 3
5 years ago This is not happening. I will never like this. Business of the movie will get affected by this yaar but for me both of the movies are must watch.

+ 3
5 years ago if this will happen it will affect the buisness of both the films.anyway All the very best to SRK and Kajol..

5 years ago Last time slb pitted his sawariya opposite srk' s on shanti om. Every one knows what happened to sawariya