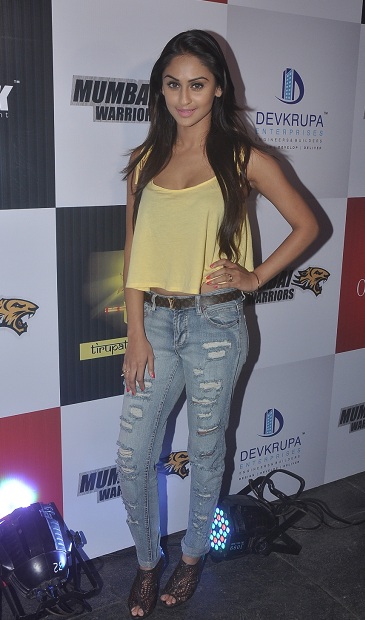 The pretty and very beautiful Krystle Dsouza who was last seen in Sony TV's Ek Nayi Pehchaan will soon be back on screen with Marinating Films and Balaji Telefilms' Box Cricket League (BCL).

Check Krystle's social networking site and you shall see her rooting for Mumbai Warriors - the team she is a part of.

In this candid chat with the lass, she speaks about being with Mumbai Warriors yet again post the pilot season and her liking for cricket.

Read on and have fun!
When asked being with team Mumbai for the second time, how good the feeling is and she says, "Yes of course, I am from Mumbai. My heart, my soul, everything is Mumbai Mumbai Mumbai. Because Mumbai is my team and I live in Mumbai. So definitely I want Mumbai Warriors to win."
Do you like playing cricket? "No I don't. Very genuinely, I do not like playing cricket. But I love playing cricket with television faces (laughs). I love watching them play and seeing them practicing so hard for the game."
And when questioned her about the entire concept of 150 top television actors coming together and playing under one roof, and she says, "Where do you get to see 150 television actors coming together and playing cricket? I do not think even any of the award functions and parties can hold 150 actors in one vicinity. So it definitely is a grand affair. Moreover, Balaji is a part of it this time so I am very very happy that Ekta Kapoor is a part of this. It is just nice to know that such big names have been joined with a little baby called BCL that we tried last year.
What is Krystle expecting from her audience since it is the first time that a sports reality show is coming up? "I am expecting a lot of audience eyeballs because they will get to see their bahu-betiyaans in the kitchen with the belans turning modern. They will get to see them in hot shorts and jersey's playing cricket and doing the locker room drama."
So what basically is the locker room drama? "Locker room drama is basically where viewers will get to see their bahu-betiyaans becoming kommolikas (laughs). Making plans and thinking how to make the opposite team lose. So, I think this is what the locker room drama is."
Practice sessions have already begun. Any hilarious incident that she has come across? "I have not attended any of the practice sessions as of yet so I do not know. I am not playing this season but I am supporting Mumbai and BCL because both of them are my babies. I am not practicing but I will go next time to distract them (laughs).
TellyBuzz wishes all the good luck to Krystle Dsouza and her team!!
Upasana Patel
8 Likes

Love_Family 6 years ago Love you Krystle Daouza!
You looked gorgeous at the event!
Can't wait for BCL!

sweet_angel27 9 years ago Yay! It's amazing that John's getting good projects, hope he becomes a hit actor, and is one day known for his acting, and not just his sexy body! :)

LimitLessFan 9 years ago Wow , i would love to see Kamat and John again , that;s a rocking combination , i wont want John in force 2, as it will be more on romance and he coming out of depression of Maya's death and all by a new lady in his life , no i want to rem him as Yash in force...
Wishing John takes up kamat;s work for sure ...
Waise bhi , Kamat approached John with this script way before John suggested Kamat to direct Force for him ...