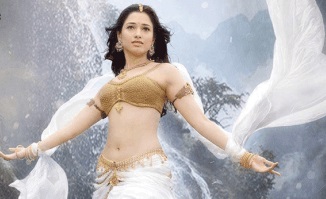 Fighting with a bow and arrow is usually a man's job as it requires a lot of muscular strength. We don't usually see our actresses playing such kind of characters which require them to use their physical strength.
But, in the upcoming movie 'Bahubali' Tamannah has changed this mentality. We will get to see our south beauty doing some daredevil stunts for her character Avantika.
When asked Tamannah about her experience she said, "For my character I was required to use the armor, bows, arrows and swords because this film is based before gun powder so we have a lot of bow and arrow happening and that actually weighed a lot. It was very difficult and my get up took about three hours to get into."
She further added, "It was difficult because sometimes the weather conditions were not conducive so when we shot an entire large episode of my work in rain; the kind of makeup I had would not stay so battling that was a constant thing but an interesting experience at the same time.  We were shooting in actual rain and in a puddle of water that was almost little below the knee, so that was another experience doing action in an ambience that is so much grungy. It was really new to me and also a difficult one.