Badmaash Company is a youngsters' film and offers music accordingly. Pritam's past works in Kismat Konnection, Jab We Met and Dil Bole Hadippa sure makes him the right choice for setting the records straight here! As for Badmaash Company, the groovy and fast numbers are already earning him the bucks! 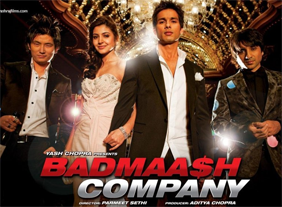 The album begins with 'Ayaashi' written by Anvita Dutt Guptan and sung by KK. A song described well by its title, its based off the lifestyle of the four youngsters featured in its video and the movie. Although the lyrics aren't so impressive, the song is hit off well with the youth - espcially the creed of party goers!

The remix version for Ayaashi is composed by Pritam and Abhijit Vagani. With a gung-ho upbeat start, it eventually fades in comparison to the original track. A true remix lover may still find enough substance in it to be entertained.

Next in the album is Jingle Jingle, sung by Mohit Chauhan and Devi Sri Prasad. The voals, the tune, the lyrics - this track is doing itself plenty of good. Pritam has yet again tempted his luck with the ever reliable Punjabi style chorus, and yes, it seems to have worked fairly!

Chaasska, the third and next song of this album is also its best bet. Although the Pritam magic in terms of its music is not at its usual hilt, singer Krishna takes the song through to hit off well on many charts.   The background score has been developed in a way to make this a dance floor friendly song everywhere!

This one too has a remix version, which like the one before is reasonably good, if not good enough to compete with its original track.

Rahat Fateh Ali Khan lends his deep throat soft Sufi like vocals to the next track, Fakira. Which after a promising start evolves to become somewhat monotonous. In our opinion having tried the combination of two different voices in overlaps for this song may have worked better for Pritam's score .

Last but not the least,is Badmaash Company. Singers Benny Dayal and MG Sreekumar have pulled off a song that deserves the crown position of a title track. There are rapping interludes and the overall music for the song is befitting.

Overall, Badmaash Company is an engaging album, even though it has little to offer in terms of new or unique. If you're not planning to spend of the records, make sure you go clubbing often enough and the tracks are sure to make their presence felt!