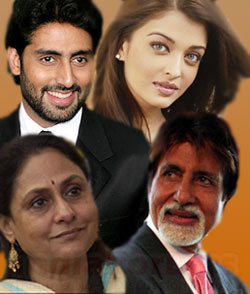 Mumbai, Feb 24 (IANS) The Bachchans, virtually the first family of Bollywood, were conspicuous by their absence as the rest of the tinsel town filled the Yash Raj Studios ground for the 53rd Fair One Filmfare Awards 2007 night.

The absence of the family consisting of four top stars - Amitabh, Jaya, Abhishek and Aishwarya - was particularly felt because they are normally seen in all major filmdom dos.

The black lady statuette gave them a miss this year and, for the lack of any other valid reasons, it was surmised that that could be the reason why they chose to give the awards function Saturday night a miss, even though they live a stone's throw away from the venue.

Was the family hurt as none of its actor members was being selected for the top Filmfare awards for 2007 in spite their having a good body of work to prove their credentials for the honour?

No answer. In deference to the position the Bachchans hold in Bollywood, none would like to speculate over why they chose to play hooky this year. At least, as of now.