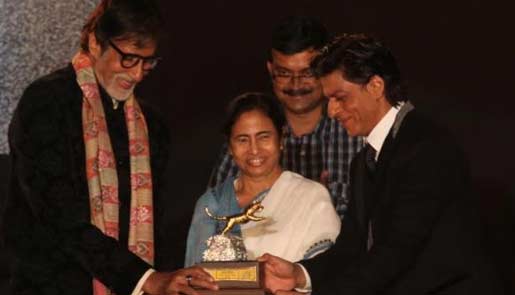 It was light, camera and action at the Netaji Indoor Stadium here, where an awed audience watched the stars descend and also saw the Indian screen giants raise a toast to the cinema buffs, in Bengali, for their sheer interest in films and love for the film personalities.

Draped in uttariyas (stoles) gifted by Banerjee, the Bachchan clan comprising Amitabh, wife and veteran actress Jaya, son and actor Abhishek and actress-daughter-in-law Aishwarya, seated on the dais, set the evening on fire with their oomph, charisma and reiteration of their links to Bengal.

Boasting of a rich oeuvre of 137 films from 60 countries, the fest will see 40 international delegates and 15 segments. There will be 31 Indian films, including 13 Bengali films. It will conclude Nov 17.