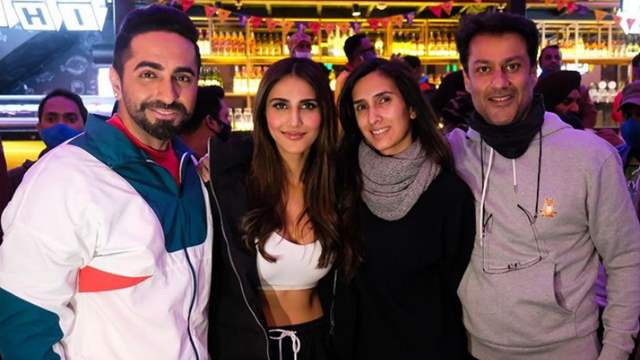 As the nation moves towards the unlock phase, the entertainment industry has slowly started rolling out shoots as well.

But will you believe that a film was announced, shot and completed amid the COVID-19 pandemic? Well yes, Chandigarh Kare Aashiqui  by Abhishek Kapoor starring Ayushmann Khurrana and Vaani Kapoor becomes the first Indian film to pull that off!

The film has wrapped up its shooting and Ayushmann took to social media to express his happiness on the same. Sharing a picture with his leading lady Vaani, director and producer Abhishek Kapoor and Pragya Kapoor, he wrote:

Today, I feel immensely proud that our film is the first one in India to finish shooting an entire film while battling the coronavirus.I have to credit my director and producer Abhishek Kapoor and Pragya Kapoor for manning the resources so diligently and so effectively. It feels amazing that we managed this feat in my hometown Chandigarh - couldn't be prouder!!! Chandigarh Kare Aashiqui is a very special film for me and I can't wait to share it with the world in cinemas next year!

Abhishek Kapoor's film is slated to be a progressive love story where Ayushmann will be seen as playing a cross-functional athlete for the first time. To match his character, the actor underwent a physical transformation and rigorous training.

The film is slated for a theatrical release next year.