View Profile
Rajeev Khandelwal is ready to hit the screens again with yet another one of his unique films. This time, he'll be staring opposite Ayesha Takia for the romantic 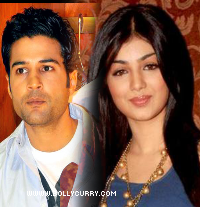 mystery, Fever, which has been produced by Ravi Agarwal and directed by Rajeev Jhaveri. Apparently, Fever is part romance and  part thriller. Making the deal even sweeter will be the beutiful shooting locales of Europe including Switzerland's Fribourg, Berne, Brienz and Zweisimmen.

Rajeev will be seen as an undercover agent who will be portraying a charming and stylish character with a suave and enigmatic look. On the other hand, Ayesha is going to receive a new look with a fusion European-Indian style. The film focuses on the lives of Indians settled in Europe and will focus mainly on the ups and downs in the relationship of Rajeev and Ayesha's characters.

Gemma Atkinson, the ex-flame of popular footballer Christiano Ronaldo, will also be making her Bollywood debut with the movie. Her character will be the one to bring the 'thrills' in the movie. While Barbara Mori had originally been offered the role, it was Gemma who landed it after negotiations.

Fever is slated to release in March 2012.

The movie definitely sounds interesting and the unique pairing might make this worth the while!