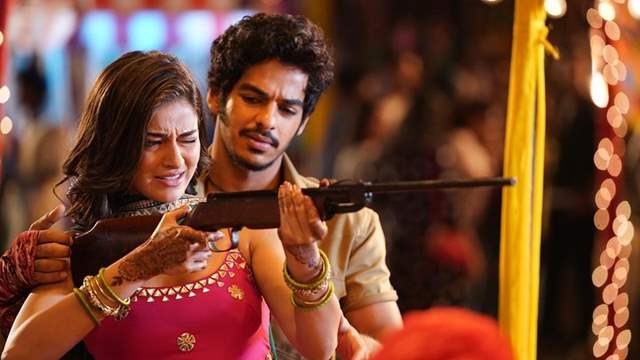 Ananya Panday has been in the news for her upcoming film, Khaali Peeli which has created a huge buzz in the audience for a brand new avatar of her Bambaiya character. Ananya has taken things a notch higher and will be seen performing action for the first time on-screen.

Recently, her co-star shared a fierce picture with a quirky caption on his social media which says, “Aur yeh apni chhaavi, Pooja ?? #taxidiaries????#KhaaliPeeli"

Ananya is seen with a rifle all set to shoot someone with a smirk and is dolled up in an Indian avatar.

The fresh pairing with a new concept and storyline is being looked forward to and one can't wait for this duo to work their magic on screen.

Apart from Khaali Peeli, the actress also has some more projects in her kitty being Shakun Batra's untitled alongside Deepika Padukone and Siddhant Chaturvedi followed by the PAN-India film, Fighter alongside Vijay Deverokonda.

RapChick101 1 months ago I like Ishaan Khatter, he’s good! Both, as an actor and a human. Pretty grounded. Talking about Ms Pandey, she’s cute and all but acting skills are less than 0 bro