Atithi Tum Kab Jaoge is supposed to be a family entertainer. But sadly it just ends up boring each and every member of the family.

We are introduced to the tiny and happy fa 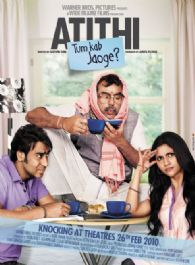 mily of Puneet (Ajay Devgan), a scriptwriter. He and his wife Munmun(Konkona Sen Sharma), an interior decorator by profession are happy raising their kid in their cosy apartment. However, their peaceful life is shattered to pieces when Lambodar Bajpai (Paresh Rawal) who is supposedly Puneet's Chachaji arrives. His arrival is ominous of the things to come, as he teaches the watchman to respect elders with a tight slap!

Chachaji is the classic epitome of what we call a 'prick'. He comes in the way of everything for this tiny family. He takes over the whole house and its belongings. Then there is his flatulence. Cans of room fresheners don't come for free do they?

But wait, Chachaji isn't all that bad. He teaches all the mantra to the kid and improves his Hindi so much that he gets distinction. And inspite of Chachaji's very different life-style and habit of poking his nose into all things possible, which by the way drives away the maid, he is a nice person. We are asked to believe it all the while.

The series of Chachaji's misadventures including his bhakti song in the tune of Bipasha's Beedi Jalaiyle continue throughout the film but raise just a titter here and giggle there. The film reaches a predictable ending but before reaching the end, it brings out a lot of painful expressions.

The message of the film- Don't get too irritated with your guests as eventually they too give a helping hand in times of need.

The super-skewing of the message with lots of irrelevant matter added for reasons only the Almighty can guess.

Over-the-top use of fart to tickle at audience's funny-bones. Seriously guys, it's funny only to an extent. Then it becomes obnoxious. Eiw!

Most of the jokes are silly and the thing called comic timing is non-existent.

Repetition of topics, for example Konkona's problem of cooking for Chachaji.

The drama in the film is just too much to take. The audience is so over the era of extreme histrionics and the makers should note that down. The combination of good actors like Konkona Sen, Ajay Devgan and Paresh Rawal has failed to work out thanks to a loose script and offhand direction.

No entertainment, no thrill, no laughter and no other frill. I suggest you give this a skip.