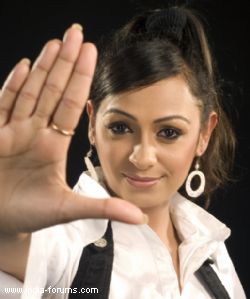 A source says, "Ashita Dhawan fondly known as Malti Bhabhi of 'Bidaai' and is also seen in a very chirpy role in Imagine's Baba 'Aiso Varr Dhundo' was initially finalized to be a part of Imagine TV's 'Nachle Ve' but now the lady has denied to be the part of the show due to some of her unavoidable reasons."

Therefore, we contacted Ashita Dhawan to know the exact reason behind the conclusion and she clears, "Actually for me it was a task to manage three shows at same time as I don't believe in accepting the offers just because they are coming to me. According to me I should be able to give my quality input to the show that I am doing, so this was the reason why I backed out from doing the show."

"Though now I got the news of Bidaai going off air, there could be a tussle between two shows at the same time. And personally I don't want to take up any other shows before this year ends as I want time to celebrate my first wedding anniversary this New Year. I will surely enter some different reality show once I get back from my celebration," adds Ashita.

That was totally a fair decision made by Ashita Dhawan, what say?

+ 2
10 years ago yes def fair decision...love her...and she looks pretty in this pic

+ 2
10 years ago i think she is good! and seh tkes good desicion in every part1

10 years ago It's her choice so she has every right to back down :)
I'm going to miss you sooooooooo much in Bidaai :(
You're such a great dancer and actress and i'll always remember you :)
Jhoot toh main bolti nahi ;)