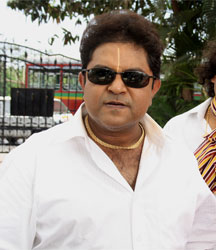 Ashiesh Roy who has been a face to reckon with in most of the ongoing shows on SAB TV will now be seen in a full-fledged role in the channel's upcoming show, Mr. and Mrs. Sharma Allahabad Waale. The show happens to be the maiden production venture of actor Ujjwal Rana's Starex Entertainment.

When contacted, Ashiesh Roy confirmed the news and said, "Yes, I am so grateful to SAB TV for accepting me, and I am getting nice roles to play. I have been associated with Yes Boss for four years, and I feel privileged to be part of more shows on the channel".

Talking about his role in Mr. and Mrs. Sharma, Ashiesh said, "I cannot divulge details about the track. It is a very good role, and the show is extremely strong. The character I play is of a dreaded mafia don Anna who is very stern by nature. But the incidents that happen around me are really funny. I have a superb look in the show. We are enjoying our shoots, and even wilfully sacrificed watching the IPL Finals yesterday, to shoot for it".

Ashiesh will also be seen in an episodic in Yeh Chanda Kanoon Hai. "I have already played two-three characters in the show. Now I have got a call to play a different character".

Mr. and Mrs. Sharma Allahabad Waale launches on May 17th, and will take the 9.30 PM slot. The show has Divyanka Tripathi and Rajesh Kumar in the lead roles. Sudha Chandran, Atul Srivastava, Akriti Singh are also part of the show.

andria dsouza 12 years ago i am pretty upset that kyunki is shutting down. it was a nice serial .its tulsi who made the serial so nice and now that its shutting down i am really sad i give my best wishes to the cast and crew of kyunki .
is it true that kyunki is gonna be shown from monday on 9x, if so then i am really gonna watch it and if anyone can confirm the news is true. i ''ll be more than glad to watch it from 9x. pls if any message about kyunki shifting to 9x then do inform.