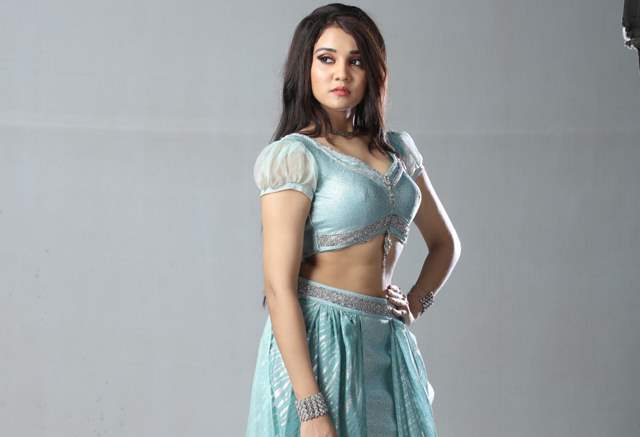 Ashi Singh, who rose to fame with her role in Yeh Unn Dinon Ki Baat Hai is currently seen in Aladdin...Naam Toh Suna Hoga and well, she got talking about establishing the character on her own, working with her co-stars, how has the journey been, and what lies in the future. While she has had a few challenges, her team seems to have helped her through.

Excerpts from the interview here...

1. What made you accept the role of Yasmine?

I never thought of exploring a fantasy character but found Yasmine’s character as a persona that would allow me to expand my boundaries and skills as an artist. Yasmine was just the character that I was on a look for. When I was approached for this role, while I was a little apprehensive at first but I was equally excited to try something new. After playing this role for over three months, I can happily say that it is one of my best decisions to take up this role.

It was tough to transition into a character that was already established and loved but more than my preparation for the role, it was the expectations that I had to meet for the viewers and fans of Aladdin: Naam Toh Suna Hoga. There was immense pressure on my shoulders when I entered the show but I took one day at a time and kept learning and perfecting even the tiniest characteristics of the character.

3. How has been your experience working with Siddharth and your co-stars?

I think I have the best co-stars and team. My experience so far has fabulous and I think I am creating memories for life. Siddharth has also played a huge role in helping me transition into my character especially helping me ace the action sequences. Performing stunts was something entirely new to me but it was all made easy by Siddharth and our amazing team. The vibe of the set is like I have gone back to college with my friends. In such a little time span, all of us have become really good friends and it’s never a dull moment on the sets. There is no greater feeling than looking forward to go to work and meet your friends.

4. What was the biggest challenge while essaying the role of Yasmine?

The biggest challenge for me while perfecting the character Yasmine was to get hold of the intricacies of performing action sequences and working in front of a green screen. The show and storyline require me to have imaginative thinking. I have started doing an intense workout routine to build that stamina and physique of a Kaali Chorni. A lot of times after shoot, we practice our action sequences for hours. It is tough but really fulfilling as an actor. I wanted to be a part of a project that gives me various avenues to keep learning and upgrade my skills and Aladdin: Naam Toh Suna Hoga is certainly such a project.

5. What are your best memories on the set of Aladdin: Naam Toh Suna Hoga?

In such a short span of time, I think I have already made countless memories. We have all turned into a small family. While we all work together, someone is always up to something fun. Siddharth especially is the prankster of the set which I often all a victim too but then I also find my own ways of pranking him. Lately, Siddharth, Shivani, Amit, Smita ji and I have most of our sequences together and I am having the best time of my life.

6. What can the viewers look forward to from the upcoming episodes of Aladdin: Naam Toh Suna Hoga?

Destiny has brought Aladdin and Yasmine on the grounds of Baghdad. While they had come to Baghdad to take the jeweled crown but their time here has made them question the ties they have with the kingdom. Aladdin and Yasmine were being trained by Rukhsar Begum for Zafar’s bigger mission, but things will take an interesting turn as Zafar decides to take matters in his own hands. It will be really exciting to see what kind of tasks will Zafar has for Aladdin, Yasmine and the gang.

7. Any message for your fans?

After 'Yeh Un Dinon..', Shashi-Sumeet Mittal To Make a Show Based in ...

Juhi_04 1 months ago For me Avneet will always be the best Yasmine but Ashi is also doing very well as Yasmine. Both Avneet and Ashi are lucky to play such a strong character of Yasmine which is rare on Indian Television.

Sujz 1 months ago Ashi is doing really well as Yasmine to a point that I would have wanted her to play this from the beginning. No offence to anyone but Ashi Singh is slaying it as Yasmine! As an old viewer of ANTSH I can say she has retained the charm of the character successfully!

beautyingrace 1 months ago Keep working hard Ashi! Iam so proud of you 👏👏